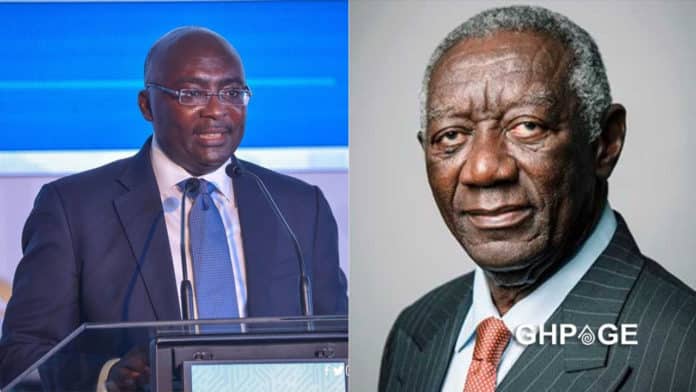 Ex-President John Agyekum Kufour has rejected reports that he has endorsed Vice President Dr. Mahamudu Bawumia as the next flagbearer of the New Patriotic Party (NPP) in the 2024 general elections.

Speaking at an event at the Peduase Valley Resort in the Eastern Region to mark Father’s Day, Kufuor described Bawumia as a “true son” who stands out among his contemporaries due to his loyalty to him and the party.

“Let me single out one person; he is also a father, but I can claim that he happens to be my son too, and that’s the Vice-President sitting right by me,” the 83-year-old statesman said.

On the back of this, Kufour’s remarks have been interpreted as his endorsement of Dr. Bawumia’s candidacy. But he has dismissed the reports and suggested that he had totally been misconstrued.

In a statement copied to the media, the former President said the comments he made about Dr. Bawumia is not an endorsement.

He explained that when he described the Veep as “a true son”, there was nothing political about his remarks or even the occasion.

“In the upcoming NPP Flagbearership race, in order to achieve party unity and sustain it thereafter for victory of the party in the 2024 elections, what President Kufuor expects from the party and political hierarchies are fair and un-engineered systems and processes that would lead to a fair selection of our next NPP flagbearer.

“This should be devoid of coercion and machinations so that the eventual selected nominee, coming out of the uncompromised freewill of the voting delegates, can easily command the support and respect of all party faithfuls, and indeed, other Ghanaians sympathetic to our cause towards ‘breaking the eight’,” the statement clarifying issues stated.