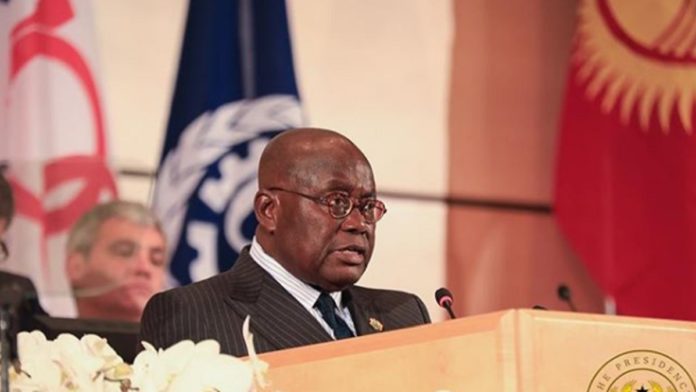 The president of the Republic of Ghana, Nana Addo Dankwa Akufo Addo has stated that it is not his job to convict anyone accused of engaging in corruption.

While addressing members at the 2019 Conference at the Ghana Bar Association in Takoradi at the Western region, the president added that his job is to refer such corruption issues to the investigative agencies.

The president further stated that since he assumed power in 2017 he has ensured that all corrupt cases are referred to the right investigative agencies.

President Akufo Addo also added that it is the law of the jungle to condemn people based on mere allegations.

According to President Akufo Addo, his opponent has made it their main agenda to tag his government as corrupt but it will not work.

He also added that he didn’t fight to win power to enrich himself but to work for the people of Ghana.

“It is not my job to clear or convict any person accused of wrongdoing, or of engaging in acts of corruption. My job is to act on allegations of corruption by referring the issue or issues to the proper investigative agencies for the relevant inquiry and necessary action.

That is exactly what has been done since I assumed the mantle of leadership on 7th January 2017. If an appointee is cleared of any wrongdoing, the evidence adduced and recommendations made by these agencies, after the investigations are concluded, are what clear the accused persons, not myself.

None of these agencies has ever indicated any pressure from the Executive over their investigations. It cannot be the case that people are condemned on the basis of mere allegations. That is the law of the jungle.

The orchestrated attempts by my opponents to hang the tag of corruption on the necks of my government and myself, despite all the manifest efforts being made to deal with the phenomenon of corruption will not work. I did not come into public to enrich myself”, the president of Ghana stated.

The President also believes that the fight against corruption will not be won overnight but will gradually take action.