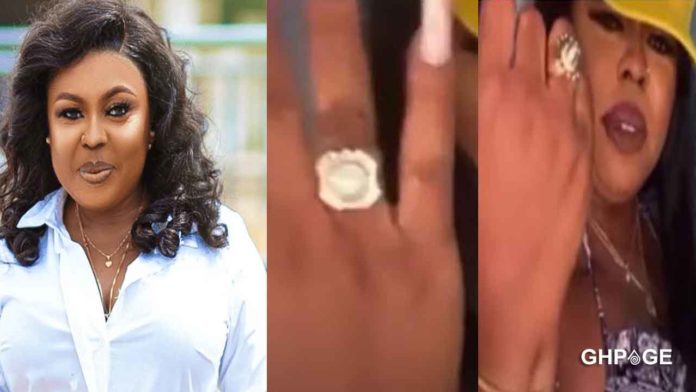 Unknown to the public, Afia Schwarzenegger has in a new video disclosed that she has a husband and is happily married.

According to actress and socialite Afia Schwar, she has been married for a year now. She has finally settled on one after her long-time divorce.

Schwar speaking in the video obtained by GHPage flaunted her huge and beautiful diamond ring making to back her claims that she got it from her husband.

Seemingly happy, the controversial media figure announced that her husband loves her to the point where he’s ever ready to face anyone who disrespects her.

She said this amidst singing her profane rendition of the popular ‘Odo y3 de sen Sika’ song.

Born Valentina Nana Agyeiwaa, Schwar revealed in the video that she has kept her marriage from social media because of what she has suffered in the past.

Afia uncovered that the gentleman she has gotten espoused to was her childhood boyfriend who got married and divorced just like she did. She made this known in the wake of her beef with Adu Safowaa.

“He’s my childhood boyfriend. He got married and divorced just like mine and we’re back together. I love him”. She said.