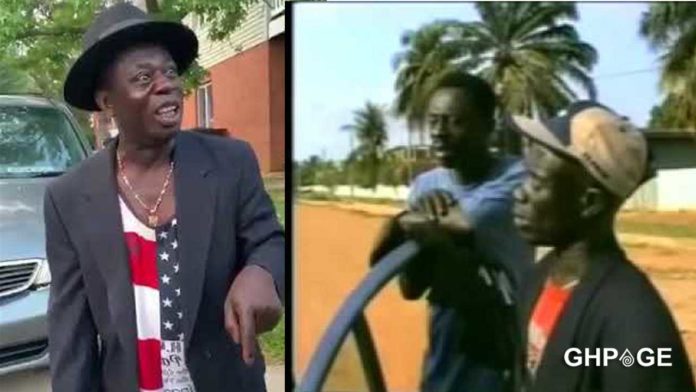 Ghanaians woke up on 30th May 2002 only to hear the death of one of its best actors John Evans Bosompim known to many as Bob Santo who died in a hospital in Kumasi.

After his shocking death, rumors went around that he killed as a result of swallowing cocaine which eventually burst in his stomach because he delayed in bringing the narcotic drugs out.

That has been the cause of death that most Ghanaians know off.

During Santo’s acting days, he has one best friend in the person of Abusuapanin Judas who was also an actor.

Well, Abusuapanin Judas after over almost 2 decades has finally revealed what actually killed his acting partner and best friend.

Speaking in an exclusive interview with Kumawood actor Kweku Manu, Judas revealed that the cocaine allegation hovering around his best friend is just false but he rather the cause of death was jaundice.

Explaining it, ABusuapanin Judas revealed that they left Ghana to Germany to perform and the performance lasted for two months before Santo’s illness became serious and brought him down to Ghana where he lived for two extra months before dying and wondered how cocaine would be in someone’s tummy for four months.

The veteran actor added that he took him to the hospital in Germany where the doctor told him that the sickness Santo was suffering from has eaten deep into his system so it would be better to take him back to Ghana.

The late Bob Santo became a household name because of his performances in many live concert shows throughout the country. He featured in the popular “key Soap Concert Party” on GTV, with his ‘Omintiminim’ drama troupe. Aside from this, he also acted in many Ghanaian movies and Ghanaian-Nigerian co-productions.

They include ‘Sika Sunsum’, ‘Double Sense’, ‘Hard times’ and ‘Banker-to-Banker’. Santo recorded a lot of popular jingles for Peace FM and did some TV advertisement, the most recent being the popular ad promoting a brand of mosquito coil.

Santo’s death was received with shock by many residents of Accra, who re-echoed his “Have you heard the news,” jingle.

Some described his death as a big loss to the showbiz industry. Santo, who left behind a wife and many children, is the uncle of the current senior Minister, Mr. Yaw Osafo-Maafo.