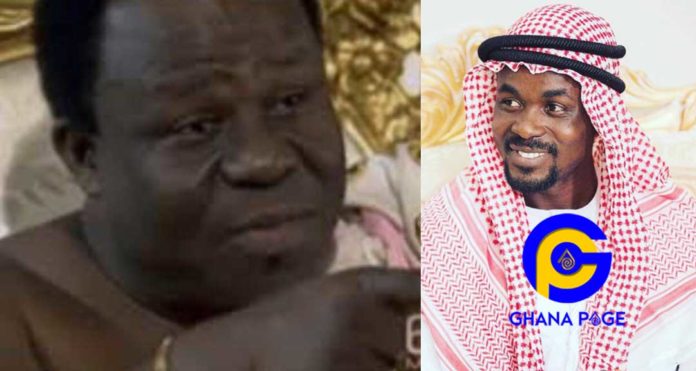 John Ackah Blay-Miezah is one of Ghana’s most popular exports of all time and a man who proved to the world that the black man wasn’t a human monkey but a human with brains and indeed, enough of it to outwit the supposedly superior white counterpart.

Blay-Miezah would forever remain in the history books of the US, Philadelphia especially in their list of villains and go down as one of the most cunning men to grace the face of this earth.

This is the story Blay-Miezah got the world to buy, according to him, he was the sole beneficiary of gold reserve amounting to billions of dollars Nkrumah stored in banks in Switzerland and Liechtenstein in an account named: Oman Ghana Trust Fund.

His evidence to this fund was an account number and a manufactured document purportedly from Union Bank of Switzerland. To access this money, estimated to be over 40 billion, Blay-Miezah needed a specially serialized diplomatic passport which would come at a huge cost and money to pay off some chiefs in Ghana who held various interests in the money, Gold in this case.

To do this, he needed money, Blay-Miezah sold to people, starting from Philadelphia a 1000 to 5000% interest on investment for anyone who supported the initiative. Yes, people bought a scheme with a profit margin of 50 to 1. For those at loggerheads with the ratio, bring 1000 Ghana Cedis and receive 50,000 Cedis.

Over three hundred people in Philadelphia alone bought into the idea and contributed over 18 million dollars in cash, across America, Blay Miezah, with the help of his right-hand man, Ellis succeeded in defrauding people in hundreds of millions of dollars. Truth is Ellis, the accomplice of scam believed the scam too. Blay-Miezah won over highly educated Americans including judges.

Back in Ghana, 1975, Blay-Miezah manages to get Acheampong’s government salivating over the prospect of landing 47 billion in Swiss Banks, he succeeded in conning the government into the scheme. Secretary to the government at the time, Mr. Ebenezar M Debrah who was a former Ghana Ambassador to the US pointed out that Blay-Miezah was a conman with a bad reputation in the US.

This was a battle even the secretary to the government wasn’t going to win, so convincing was Blay¬-Miezah that a powerful government official, one of Acheampong’s trusted lieutenant was pushed out of the government altogether because he was seen as an enemy of progress.

Acheampong’s government gave Blay-Miezah a Diplomatic Passport. He then relocated to spread his tentacles in Europe and succeeded in bringing more people into the scheme. Wanted in America, he could not be extradited from Europe for prosecution in the US because he was a diplomat and hence benefited from immunity.

In 1979, he availed himself to contest the presidential seat in Ghana but was disqualified even though he had a good number following him. His main message was to get the power and use the power to retrieve our cash detained in Europe.

When the PNDC took over from Liman through the coup, he managed to get the government embroiled in the scheme and had his Diplomatic Passport renewed on the promise of raising 15 billion for the government. In fact, he traveled to Cayman Island with Captain Kojo Tsikata, in Charge of Security under PNDC and Dr. Kwesi Botchway who was in charge of finance. They returned empty-handed, embarrassed and the result is at the conclusion of this post.

He is rumored to have succeeded in defrauding people to the tune of billions of dollars.

A classy man who wowed the people he encountered with his breath-taking oratory prowess, Blay-Miezah knew how to entertain his victims in expensive hotels and joints and treated them to drinks that were the preserve of the very affluent.

As it is said, there is nothing entirely evil, even the mosquito makes us tidy our environment. At the time when Blay-Miezah made a fool out of the whites, blacks were considered just the next step after animals with lower thinking capacity compared to the whites. In view of this, when one black succeeded in swindling thousands of whites of reputation, many white folks began to question their orientation. He proved a point for Africans, albeit in an unpopular way.

Nigerians adopted Blay-Miezah’s approach, commercialized and patented it as 419.

So convincing was Blay-Miezah that even his family believed him and fought among themselves as to who’d take his place and actualize his vision to land the money after he died. They were willing to chase what was really a mirage at the peril of their lives because they believed the scam.

They tried the pulse of both the Kufour and Mills’ government but with the past history, each government wanted to avoid being embarrassed and soiling their international reputation.
CBS produced a documentary on him and described him as the world’s greatest conman. Blay-Miezah would have none of that, he took them on legally and won the case. CBS had to compensate him financially. With this global popularity, Blay-Miezah was positioned to lure more people. Talk about a way to turn lemons thrown at you into lemonade.

Despite his soil reputation globally, he still associated with high profile personalities across the globe. The former Attorney General of the United States of America, John Mitchell visited him twice in Ghana with little care of how it was going to affect his reputation

Dr. John Ackah Blay-Miezah, a.k.a Nana Ackah Nyanzu II a.k.a Liina Disca of Allengenzule, Western Region, Republic of Ghana died in 1992 while under house arrest for deceiving and embarrassing the PNDC government.
Ladies and gentlemen, I present to you the Grandfather of Nana Appiah Mensah, aka NAM1 and the godfather of all conmen of African descents.

Share
Facebook
Twitter
WhatsApp
Previous article‘No matter what you put on, your dysfunctional, ugly K-legs are revealed’ – fan fights Juliet Ibrahim on social media
Next article‘Apostle John Prah is not my type, I have about 100 men after me’ – NAYAS response to critics

A rich 50-year-old man has caused a massive uproar on social media after the news about him marrying six(6) beautiful women in...
Read more