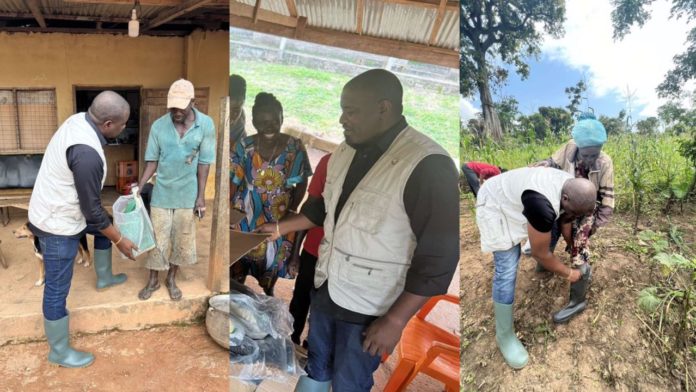 It is part of the actor’s initiative to donate these items to support farmers in his home district, the Guan District.

John Dumelo has taken to farming with so much passion and aside from his political ambition, he has donated these items to the poor farmers as critical support.

Following the hikes in food prices, John Dumelo has deemed it fit to support the efforts of these farmers with boots and cutlasses so as to cushion them.

In a tweet with accompanying photos where he is seen helping the farmers to put on the boots, John Dumelo revealed that he would continue with the initiative, especially in the poor Guan District of the Oti Region.

The distribution of free farm boots and cutlasses to farmers across the Guan district has commenced. I hope to reach every farmer soon. The next step would be to provide efficient farming equipments to maximize and add value to what they grow

John Dumelo is a large-scale farmer of ginger, maize and other produce. He has redefined agriculture as a lucrative venture. He has also encouraged youth to enter into farming.