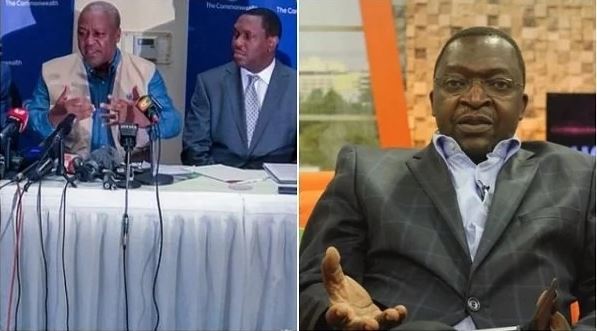 The Kenyan Supreme Court has annulled the election results in Kenya and called for an organization of another election within 60 days, citing irregularities.

But Kenya opposition candidate Raila Odinga claimed that the commission’s IT system had been hacked to manipulate the results.

Chief Justice David Maraga said the 8 August election had not been “conducted in accordance with the Constitution” and declared it “invalid, null and void”.

Meanwhile, the observer missions including the Commonwealth Election Observers led by Former President John Mahama declared the process as ‘credible and transparent’.

However, a Kenyan legal practitioner and political analyst, Martin Oloo have argued that the annulment of the presidential result is an indictment on foreign observers who saw the elections as a clean one.

READ ALSO:VIDEO:Maame Serwaa Mention Names Of Kumawood Actors Who Have Proposed To Her

And this declaration, the Kenyan political analysts said is an indictment on President John Mahama.

“Observers came to observe and decided to tell us that the election was free and fair and that counting was orderly. They had no patience to wait and be sure whether everything is indeed free and fair. It’s a shame for us in Africa.”

“I think it’s an indictment on President Mahama who led the delegation and I think it’s the main reason why John Mahama lost the elections because to come to Kenya within a short time and tell us what to do is a shame,” he said on Adom FM’s Morning Show “Dwaso Nsem” Friday.