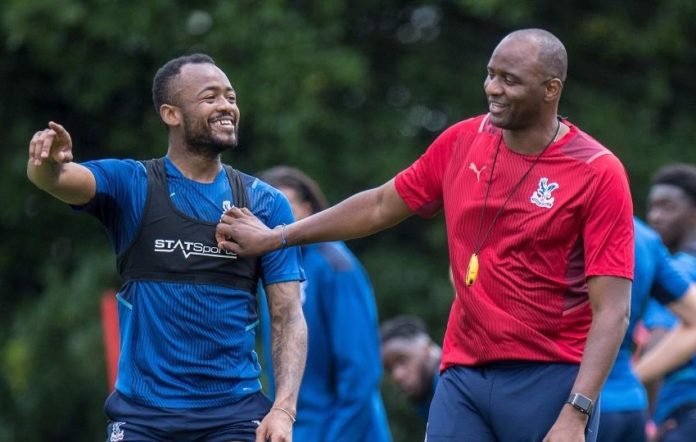 After a sustained period of pressure, the striker netted from a tight angle after 65 minutes to secure Palace a point.

He expressed his pleasure at scoring for others, but especially for Vieira.

“It’s a relief, I think,” he told the BBC after the game. “I knew it would happen eventually because I’d been working really hard for [a long] time.” “I was happy for myself personally – it is important for my confidence – for my family, friends, people who have been supportive, and especially for the manager, who has been extremely supportive.” Since the first day the manager came in, he has told me that he has a lot of faith in me and that I should keep working hard and it will come. It may take a long time, but it will pay off eventually, and it did today. We’re all relieved… There were some negatives and some positives today, but I think it was a good outcome.”

Keeping his sights set on the prize, Ayew stated that he has had some misfortune in the past, but that luck was on his side today.

“Sometimes in football I’ve been really, really unlucky,” he continued, “and I think today luck was on my side.” It works sometimes and doesn’t work other times. It’s only football. What I can control, I control, and what I can’t control, I don’t focus on. I only concentrate on what I can control. Today everything went my way. ” I hope [I keep scoring], I really hope so. But the most important thing for me is to do my best for the team.”

Finally, the forward addressed the game as a whole, saying, “I don’t know why we played really, really well and then we just stopped playing.” We were sucking in the pressure at times and conceded two goals in five minutes.

“In the locker room, we made some adjustments and came back for the second half with a bit more desire, higher up the pitch, and that allowed us to equalize.”