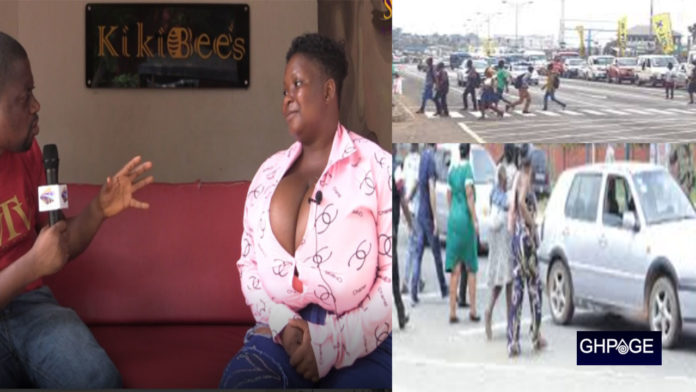 Joyce Addo widely known as Queen has disclosed her big breasts once came out from her brazier while crossing a road as she was gushing.

According to her the incident created a scene from the bystanders which made her quickly picked a taxi and left for home.

Joyce Addo spaeking in an interview with SVTV Africa’s DJ Nyame narrated that while running across the street her bra could not contain the heavy weight of her boobs which got her bra torn and eventually letting out the bigger boobs.

”I felt so shy especially the comments from the taxi drivers and people around. I was wearing a dress too so it was visible.

I heard comments you’ll kill us with your boobs, what is this? So I quickly jumped into a taxi and went home, ” Queen said.

The big boobs woman also revealed an experience at the gym where a guy fell from the treadmill because he was not focusing but rather staring at her bigger boobs.

”As soon as I entered the gym, I noticed him staring. He eventually fell off the treadmill and I knew it was because of me, ” Queen added.