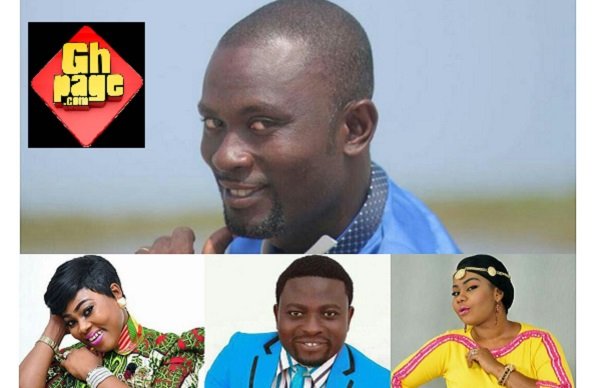 READ ALSO: Do You Still Remember Gospel Musician Ama Boahemaa? This Is How She Looks Now

Bra Paul in an interview made mention of top Ghanaian gospel artists including names like Brother Sammy, Joyce Blessing, Perpetual Didier, Gifty Osei and many others whom he thinks are heading to the wrong direction because of fame and money.

He added that he sees these gospel musicians together with some popular men of God not to be the true identity of Christ because their dressing, lifestyle and their choice of language over the years have stolen them away.

The singer made a point that these musicians and pastors with their deceitful personalities are leading most of their followers astray and it is very pathetic.

This is how Bro Paul narrated everything in the interview,

” A Christian, even though he or she is not a saint, cannot just lead any life. We as gospel musicians should be role models and agents of change to those living in the dark. The way we dress, talk and act in public should be devoid of controversies which draws unnecessary attention. Brother Sammy is One musician with so much of talent, but he is not living to expectation as his arrogance and womanizing nature over the years will clearly tell you where he is heading and the motive he is putting in our minds as believers. He is human and as humans, we are bound to making mistakes but it becomes unusual to keep repeating the same volumes of mistakes or even worse mistakes over and over again. I don’t hate him but he is acting against what he was sent to do. His arrogance has gotten to an extent where a very popular television station here in Ghana ( Atinka TV) has refused to play any of his videos or the ones he was featured on and I believe it is a bad dent to a fine musician like Brother Sammy.

“Any pastor who in the name of making profit will tell his members to pay consultation fee or will sell anointing oil to their members is fake. I don’t want to talk about Bishop Obinim and kumchacha as they both are not only rejected by God but by the devil as well. The like of prophet Ebenezer Adarkwa Yiadom (prophet one) and his likes are all wolves in sheep’s clothing and should be put back on their track and it is the onus of the Christian counsel to do so. The truth hurts but until it is told, no one will be willing to change. Some gospel musicians take in alcohol before performing on stage and I believe its about time we expose all these wolves to the public” He revealed.

Mr. Paul Addae on Joyce Blessing continued to explain that since Zylofon Media signed the gospel artiste, she is gradually diverting from her normal self as she has accepted fashion as her biggest and topmost priority.

READ ALSO: Gospel artists Rose Adjei & Patience Nyarko exchange of insults; This is all you need to know

“Joyce blessing is a fine artist but if I am allowed to advise her, I will tell her she is deviating from the normal Joyce blessing we used to know. Her songs these days lacks biblical content and she has made fashion as her topmost priority. Look at the kind of dress she wore to Becca‘s concert and the kind of criticisms she received as a gospel musician, how serious will a worldly person take you? The fake lives we live as gospel evangelists and still gets the confidence to defend ourselves is overwhelming. Truthfully, I don’t classify Perpetual Didier’s ‘krom Aye De’ as gospel song neither do I see her as a gospel musician, she is in for the fame and will do anything for it” he concluded.

Well, how do you also see these aforesaid musicians and pastors, looking through their lifestyle and attitude as pointed out by the singer, Mr. Paul?

You Might Like To Watch Video: Kuami Eugene Says He Made Sacrifices To Make His Song Hit