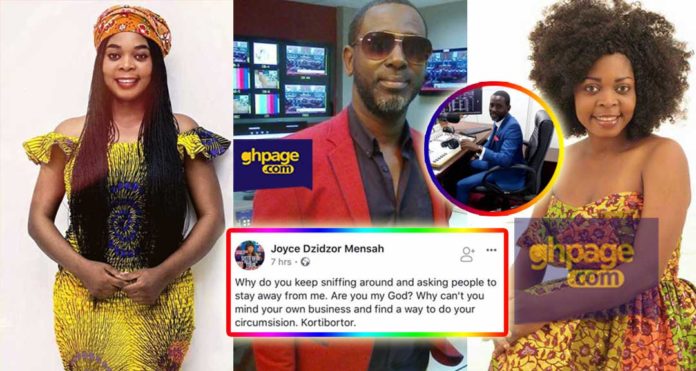 Former HIV AIDS Commissioner, Joyce Dzidzor Mensah has sent a strong warning to the TV3 presenter, Root Eye to stop gossiping about her and rather channel that energy into getting his uncircumcised p*nis circumcised.

According to the controversial lady, Joyce Dzidzor Mensah, Root Eye is always sniffing around and telling people to stay away from her and she finds it outrageous.

She warned Root Eye to mind his own business and concentrate on getting his Kortibortor cut (Uncircumcised dick circumcised).

“Why do you keep sniffing around and asking people to stay away from me. Are you my God? Why can’t you mind your own business and find a way to do your circumcision. Kortibortor”.

SEE ALSO: Kristoff Adjei, the HIV+ ex-boyfriend of Joyce Dzidzor Mensah who vowed to infect other women speaks – Denies being HIV+ with evidence

The question bothering everyone since she made that post on her Facebook timeline has been: How did she know Root Eye is a Kortibortor?

Could it be Root Eye is one of the guys who has had an affair with Joyce Dzidzor Mensah? As at now, it’s not clear the HIV status of Joyce Dzidzor.