Video: Stop Jubilating Because I Never Begged Delay For An Interview – Rosemond Brown 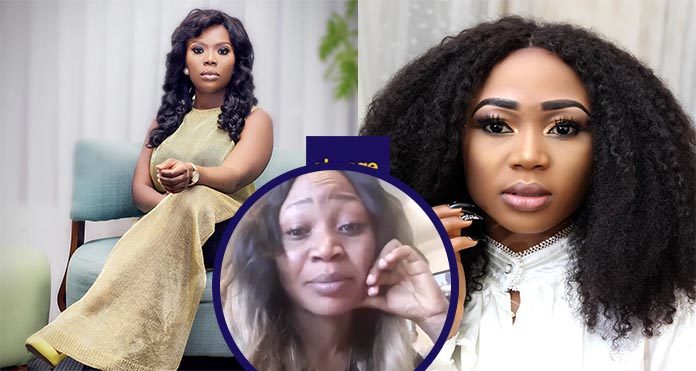 It was reported yesterday that popular female show hostess Deloris Frimpong Manso also known as Delay has cancelled her interview with Rosemond Brown.

In case you don’t know Rosemond Brown, well, she’s the young girl who was spotted bra-less and hot at the VGMAs was interviewed by Joy News and confirmed to the host that she also sleeps with big men in exchange for real properties and not just renting of apartments.

READ ALSO: Man Leaks Own S*x Tape With Girlfriend After Blackmailing Her To Fund $300,000 To Pay His Debt Failed

It all happened when Delay asked her fans if they would want her to interview Rosemond Brown on her popular celebrity talk show. But according to the fans, Rosemond Brown don’t qualify to appear on the Delay Show since she’s not a celebrity but any ordinary and hungry lady parading herself as slay queen, pro ashawobrity.

This is because the new approach adopted by Delay is that to appear on her talk show, you need to pass a vetting by the fans. That’s, the interviewer must get public endorsement before the interview deal can be established.

Rosemond Brown has finally responded to the fans of the Delay Show for rejecting her supposed interview with Delay. In the voice of Rosemond, she never asked Delay for the interview, therefore, for Delay to have her in mind as a possible guest proves that she’s blessed beyond measure.

READ THIS: Video: Wife Of Late Maj. Adam Mahama, Barbara, Hark Back To How She Spent Her May Day With Late Husband Last Year

“Indeed, I’m blessed. So I woke up today to find out that Delay cancelled an interview she wanted to do with me on her show and people are happy. It’s a great privilege for me because I didn’t ask for this and for her to believe in me shows that I’m blessed,” she said.

As usual, she sent out a strong warning to those who’re jubilating because she couldn’t make it to the most popular celebrity talk show – The Delay Show. According to the slay queen who sleeps with married men for houses and cars, haters should find something better to do for no one can tame her success.

“Haters I see you all but no one can block my shine. What’s your problem? Please focus on yourself and let me be!” she warned.

READ MORE: A 62-Year-Old Woman Who Married A 9-Year-Old Boy In 2014 Has Finally Gotten Pregnant

Stop jubilating cos I never begged Delay for any interview