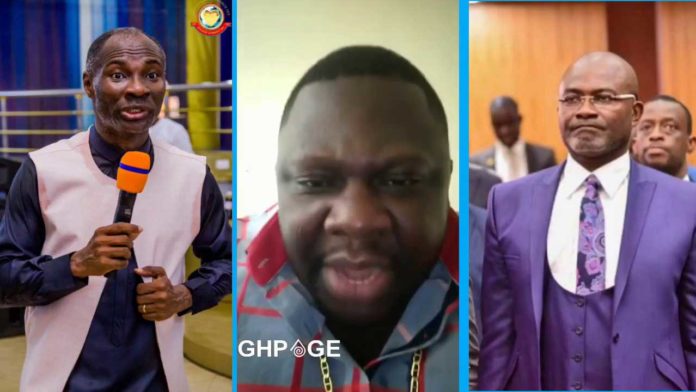 All around the social media, it is known that Prophet Emmanuel Badu Kobi is the latest victim to have fallen in the hands of Hon. Kennedy Agyapong who has made it clear that he would make sure the man of God goes to jail.

The fight between the two started after the preacher described the first gentleman of the land President Nana Akuffo Addo as the worst President since independence.

But the politician who wouldn’t take that comment lightly responded and dropped some dirty secrets about the renowned prophet which has even made official of Ghana Revenue Authority even to seize some of his cars.

But one of Prophet Badu’s junior Pastors identified as Osofo Kennedy has thrown his weight behind Badu Kobi stating that he is surprised why people including Christians are treating his father as if he has killed a human being.

In a video sighted, Osofo Kennedy is heard saying that there is no way Hon. Kennedy Agyapong can triumph over Prophet Badu Kobi adding that he has been anointed by God and there is no way a mere mortal can bring him down.

He continued that he is even more disappointed at some men of God who instead of standing with their colleague Badu Kobi are rather joining Kennedy Agyapong to treat the preacher this way for fear that he might also charge on them.

Sofo Kennedy urged Christians to rise up against people like Kennedy Agyapong because he won’t be in power forever and one day other people would rise up and do the same to him because he is trying to fight against God.