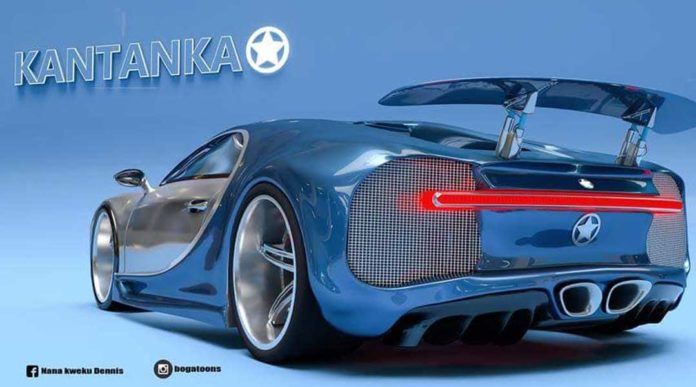 Kantanka automobile a subsidiary under the Great Kosa Network headed by its CEO Kwadwo Safo Jnr has released 3D photos for their futuristic “Kantanka Bugatti” which they would be bringing into the system.

The designer Nana Kweku Dennis (Facebook) shared photos of the Katanka Buggati (Mmrikatufuo) on social media and Ghanaians and some Africans are falling in love with it.

The automobile firm has been in the news since the German Chancellor paid a working visit to Ghana some few days ago and disclosed that German car manufacturing company VW have plans of setting up an assembling plant in Ghana and that the company is expected to begin operations in Ghana next year a deal which the government agreed to immediately.

This made Kantanka angry and blasted the government for its hasty approach of towards the VW agreement. And released a statement about the whole deal.

“We want to state emphatically that we welcome the news of VW setting up a plant here in Ghana. We are not against it. We are aware there will be competition, as there has always been and this is going to give us the marginal propensity to work hard and achieve our long-term goals for mother Ghana and Africa.

“However, we are of the view that government has hastily signed the agreement without broad stakeholder consultations.

“We are shocked to learn that the Ministry of Trade and Industry is part of this deal and want to question the Minister’s position in the promotion of trade and industry in Ghana vis-à-vis the local automotive industry,”.

Also Read: Are Safo Kantanka’s “Made in Ghana” vehicles really made in Ghana??

CEO of the Kantanka group Kwadwo Safo Jnr speaking to Francis Abban on the Morning Starr last Monday dismissed claims raised by some people that they do not have the capacity to produce in large quantities.

“We will keep pushing the Kantanka brand till we see our Presidents and Government officials riding in them. We can make about 200 vehicles a month. When demand is high, we increase production”.

He added that they have an order from some African countries for the supply of some 1000 vehicles.

“On my table now, I’m to supply about 1000 vehicles to some African Countries”.

Check out photos of the Futuristic Kantanka Buggati below:

SEE MORE: Rev Obofour reveals a deep secret he did with Obinim