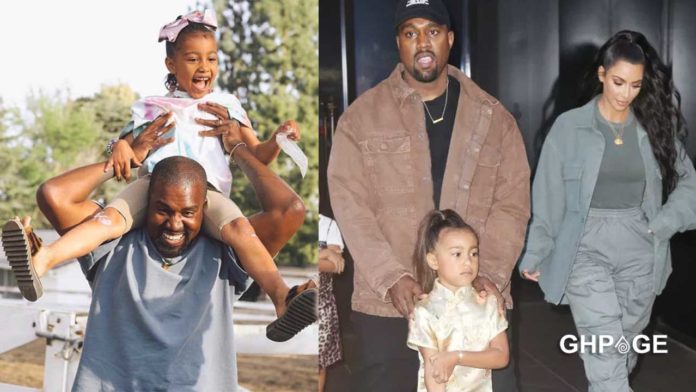 Rapper Kanye West has banned his daughter North West from putting on make-up as well a crop-tops after he recently announced that he has seen Christ.

North West age 6 whose love for makeup is quite obvious as it has been displayed on social media from time to time. Well, it seems a spanner has been thrown into that wheel.

According to Kanye’s wife, Kim Kardashian, she revealed to E-News, that North has been banned from using makeup till she becomes a teenager. She also added that it caused a big discussion in her household but it is all for the best.

Kim said: “North is trying to get in on the makeup but she’s being blocked heavily because her dad has stopped all makeup for her until she is a teenager.

“It’s a big discussion, a big fight in the household right now but it is what’s best.”

The 39-year-old mother added that as parents they really didn’t want their daughter wearing makeup at a young age.

In another interview with Zane Lowe for Beats 1, Kanye revealed that he has also banned North from wearing crop tops because he feels differently now that he is a Christian.

He said: “I don’t think North should wear crop tops just because I had her wearing a slip dress when she was two-years-old. I think and feel differently now, now that I’m Christian, now that I’m founder of a $3bn organisation and married for five years”.