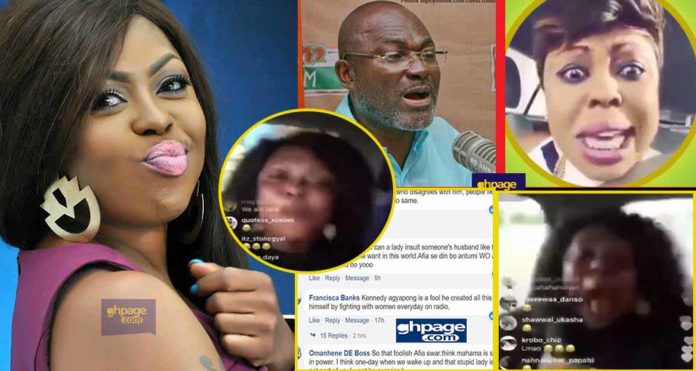 Tv show host and comedienne, Afia Schwarzenegger, who has not been in good terms with politician and Assin Central MP Kennedy Ohene Agyapong has once again showered praise on him in a new video.

She further noted that due to his honesty, his own political party, the NPP always undermine him. “They sell him to his enemies because of the truth he always says, they don’t like it,” she revealed after she was asked by a fan in an Instagram live video whether she would love to venture into politics.

This is not the first time Afia Schwarzenegger has showered praises on Kennedy Agyapong. Afia Schwarzenegger who has never seen any good done by the lawmaker praised him for being a good father and consoling his daughter during the burial service of his wife, Stacy Offei who died after going through surgery at Dr Obengfo.

Share
Facebook
Twitter
WhatsApp
Previous articleThis is what Sammy Flex has to say about the death of Willi Roi
Next articleYvonne Nelson, Okoro and others spotted at John Dumelo’s son’s naming ceremony