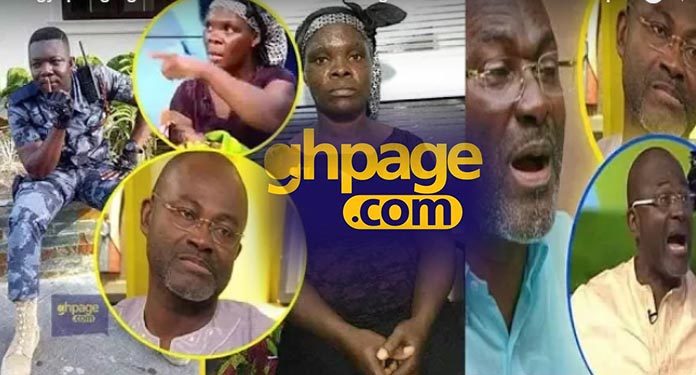 The member of parliament for Assin Central, hon Kennedy Agyapong has waded into the ongoing Midland bank assault saga involving a policeman and a nursing mother condemning the act.

In the video which circulated on social media, the police who was identified as Fredrick Amanor is seen slapping, beating and dragging the woman on the floor.

According to Kennedy Agyapong, the man who went in for the baby of the woman when she was been beaten should be punished more than the police officer.

read also: ANAS AND I ARE READY TO FACE KENNEDY AGYAPONG – KWAKU BAAKO

In his assertion, the man in question further allowed the police officer to beat the woman even more.

“Ghanaians are all condemning the police officer rather than the man who took the nursing mother’s baby. he should have intervened for the woman and helped her fro taking more beatings from them officer”

He also called for the bank to be dissolved completely as in the case of DKM, the company was shut down.

Another issue that was raised was Kweku Baako’s BBC explanation on Anas’ Number 12.

read this: Despite Group denies buying apartment for woman assaulted by police

Before the premiere of Anas Aremeyaw Anas and the Tiger Eye’s latest exposé nicknamed Number 12, the Editor-In-Chief of the New Crusading Guide, Abdul-Malik Kwaku Baako stated that the investigative project which was centred on corruption in Football activities was a joint project between the Tiger Eye PI and the British Broadcasting Corporation.

He further stated that in spite of the agreement with Anas and BBC, the presidency without informing either Tiger Eye or the BBC, took action against Kwesi Nyantakyi even before the video was premiered.

But according to BBC, they did a documentary “Betraying the Game” broadcast after Number 12 was first put into the public domain and it was an independent and impartial work and a report about Anas’ investigations. Read the full report here.

read also: I will always support Kennedy Agyapong over Anas – A Plus

Kennedy Agyapong who exposed Anas in his “Who watches the watchman” video stated on the show that Kweku Baako has betrayed the President in the sense that, he secretly recorded the conversation between Anas and Akufo Addo when they went to show him excerpts of the Number 12 which was due to air on June 6, 2018.

He further advised Kweku Baako to be careful when defending his boy[Anas] since some evidence he brought out has shown clearly why he gave him such advice.