Obinim was a yogurt seller when I became a pastor he should show respect or I will deal with him-Apostle Kennedy, Jnr pastor of Badu Kobi warns [Video] 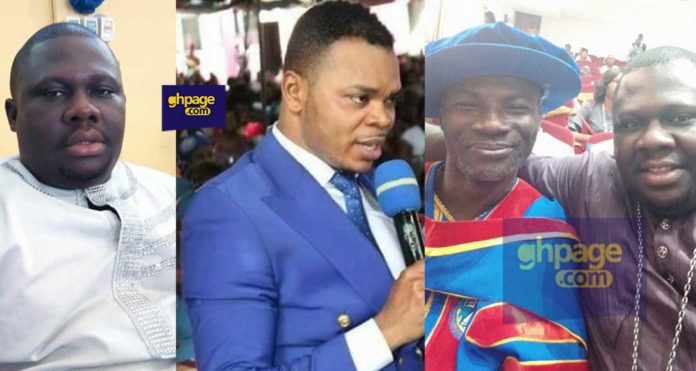 Apostle Kennedy Afreh, the junior pastor of Prophet Emmanuel Badu Kobi has lashed out at Bishop Daniel Obinim and has warned him to be careful how he talks about him because he is a senior in the ministry before he even thought of becoming a pastor.

In a video obtained by Ghpage.com, Kennedy Afreh was sending a strong warning to the founder and leader of International God’s Way Church, Bishop Daniel Obinim aka Angel Obinim for comments made by Angel Obinim he finds insulting.

According to Kennedy Afreh in the video, when he was an ordained apostle, Bishop Obinim was a mere Yogurt seller who used to come and sell his yogurts at his church so he should be extremely careful how he talks about him.

Apostle Kennedy Afreh explained that Angel Obinim sat on his TV station and described him (Apostle Kennedy) as a troublemaker who causes confusion and bring fights everywhere he finds himself.

But Kennedy Afreh explained that he only contacted Roman Fada, the Atinka FM presenter who is close to Obinim to talk to him for all the feuding pastors to settle their differences.

He never started any fight or confusion so he sees no reason why Obinim will sit on his TV station to speak about him like he is some “Small Boy”.