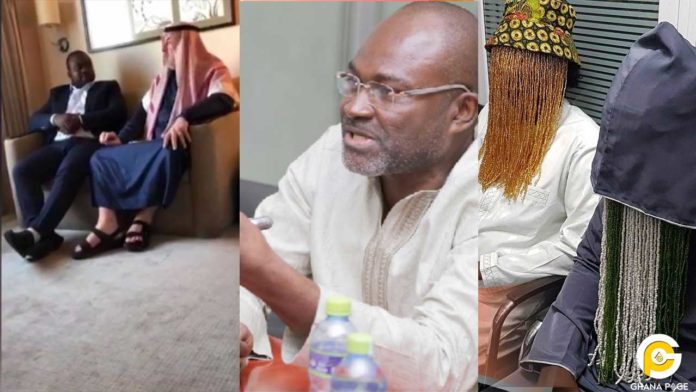 Kennedy Ohene Agyapong, the MP for Assin Central has finally shown the part 2 of Anas exposé he promised to show on his return from the USA. He has also shown an interview with Sheikh Al Thani, the Arab used by Anas Aremeyaw Anas and the Tiger Eye to trap Mr. Kwesi Nyantakyi, the former GFA president.

Hosted on his TV show, Net2 TV, Kennedy Agyapong started by naming the people behind the Judges set up and how some high profiled judges took luxury cars as a bribe. He also mentioned names of Judges who were not corrupt but set up by Anas to fall at the request of some jealous judges.

Kennedy Agyapong also exposed more Tiger Eye PI workers who ‘connive’ with Anas at all times to blackmail others.

On the same show, Kenney Ohene Agyapong showed an exclusive interview with Sheikh Al Thani, the Arab businessman who was used by Anas to trap the former Ghana Association president, Mr. Kwesi Nyantakyi in Dubai.

SEE ALSO: Kennedy Agyapong engages in a brawl with minority whip in Parliament

According to the Sheik of Anas who is not actually a Sheik, all the money used in the investigation in Dubai were brought from Ghana to Dubai by Anas himself. They were packed in 4 different bags totaling at least $200,000.

This raises the question of money laundering according to the host who interviewed Sheikh Al Thani. He also revealed there was no attempt to meet the president. He went further to explain how Nyantakyi was trapped and why he feels bad about it.

WATCH THE WHOLE VIDEO BELOW

Since Anas Aremeyaw Anas premiered his Number 12 exposé centered on corruption in Ghana Football, Kennedy Agyapong has mounted a defense for people exposed by Anas and has vowed to show to the whole world Anas is corrupt.

SEE ALSO: Anas set to drop a wild video that will shake NPP-Prophet

He first showed a video he titled “Who Watches The Watchman” in an attempt to discredit Anas. And even showed the identity of Anas and other Tiger Eye workers including Ahmed Hussein-Suale which many believe led to his murder