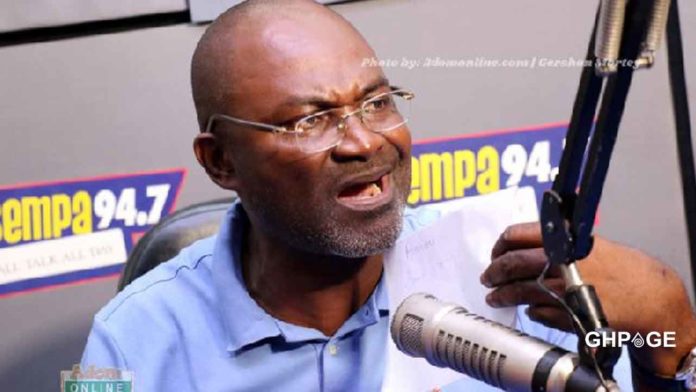 Loud-mouth politician and the Member of Parliament for Assin Central, Hon. Kennedy ‘Akompreko’ Agyapong in his bid to expose all the fake pastors in Ghana is stopping at nothing until he brings them to book.

READ ALSO: I know Okomfo who works with Rev OB of MOGPA-Ken Agyapong

His campaign and zeal to fight for the average Ghanaian and open their eyes on the kind of ‘Men of ‘God’ they are and have been hailing and following blindly is something he’s not throwing away, not any for any reason.

The maverick politician seated on his owned television station NET 2, has boldly given a full list of highly confidential list of pastors who have begged him not to expose them on live TV.

Since he has vowed to go at length and do whatever it takes to bring those fake pastors down, he can’t just hide this information from the ordinary Ghanaian who may have fallen a victim to their gimmicks at their various places of worship.

Below are names he mentioned as being the ones who have been chasing and begging him not to expose them;

Kennedy Agyapong is leaving no stone unturned on this man. His allegation against Badu-Kobi was that he killed his son and buried him in the confines of his church and also sacrificed one of his associate pastors.

Adding to this, Rev Owusu Bempah confirmed Kennedy’s allegations against Badu Kobi in one of his live sessions. Note, Prophet Badu Kobi was trained under Rev. Owusu Bempah, so he knows more about him.

On the back of that, Kennedy Agyapong revealed that Prophet Badu-Kobi has called him privately and begged him to furtherly expose him.

According to Hon. Kennedy Agyapong, the ex-husband of gospel musician Obaapa Christy, Pasto Love has called to admit to the evil revelations of his that were exposed by him.

On several occasions, the latter comes to defend himself via series of interviews quashing every single accusations by the Honorable Member against him.

On the program, Kennedy Agyapong said the said pastor, through his friend, called to apologize and admit to committing the said acts, hence his plea for Ken to withdraw from exposing him.

Speaking on Net 2 TV, Kenndey Agyapong told viewers that Bishop Obinim has tried severally and through different means to get him to give in to his appeals but he is not until he is brought down to nothing.

As its widely known and seen, Obinim has suffered at the merciless hands of Kennedy Agyapong as he keeps hitting him hard with fresh and damning pieces of evidence to back his claims. In fact, Obinim has really suffered chai!

Prophet Naakwa Isaac was accused of selling miracle water, food and ointment which according to Kennedy Agaypong was false and outrageous.

Kennedy Agyapong said Prophet Naakwa Isaac went on his knees weeping to render an apology to him through his brother, Danquah Smith and asked that further harm not be done to him.

Determined Kennedy Agyapong also added that, in all, six men of God had and are apologizing and begging not to be exposed but he has paid deaf ears to them.

He promised to mention the other two at a different time.