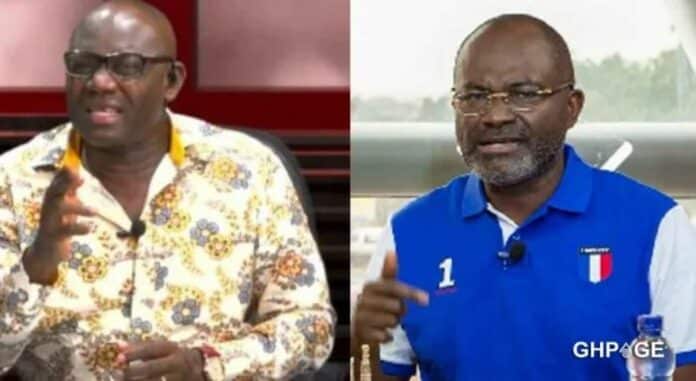 Speaking to some NPP sympathizers in a meeting, the revered politician publicly disclosed for the first time that he has cancelled NET2 TV’s HOT SEAT program because of Kwaku Annan’s insolence towards Dr Bawumia.

According to Kennedy Agyapong, although, Kwaku Annan chose to vigorously attack the current vice-president on his own YOUTUBE show but since he works for him and he’s aware that he’s an NPP bigwig, he had to completely cut ties with him.

The MP continued that he wasn’t aware Kwaku Annan had insulted the veep until he was prompted by one of his friends, Nana Amankwaa, who later sent him the video after their conversation on the phone.

Kennedy Agyapong stressed that he was left with no other option than to sack Kwaku Annan because he doesn’t want his employee to cause chaos in his political party.

The people who were listening sounded very pleased with Kennedy Agyapong’s decision to sack Kwaku Annan and applauded the MP for doing the right thing.

Check out some of the comments from Ghanaians below;

@Omaameo – Ironically, Kwaku Annan was some time ago caught on camera, allegedly taking a bribeHe gained a job, for that because they both had a common enemy. This same person tells his mind, about the Vice President, and he looses his job? This same person, said worst things about the former President. He he was applauded for! Eiii hypocrisy paaa nie! Hmmmm .

ambitious_afia – When is coming is doing and when it is doing it is coming. Asem ooo