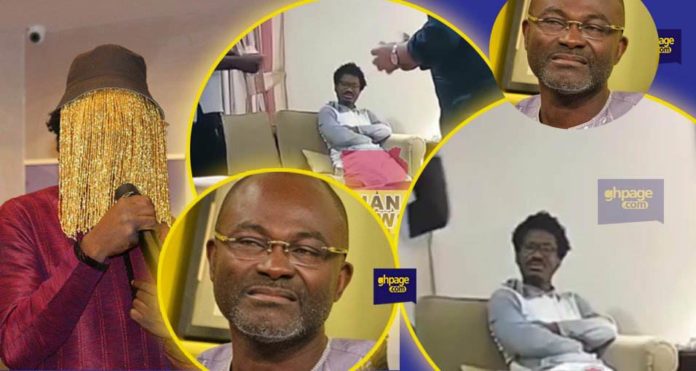 The controversial MP, Kennedy Agyapong in a latest video has unmasked Anas’ (allegedly) full face wherein it was monitoring a transaction between his team and some people who looked to be Arabs.

Ken previously had released many pictures which are alleged to be the controversial journalist.

Kennedy Agyapong in his several attempts to discredit the journalist claimed that Anas often sets up most of his victims, and thereafter records conversations with them.

He had also stated that there are high rise buildings in Dzorwulu which belong to Anas. According to him, Anas dubiously obtained his law degree with the help of a former Chief Justice.

The maverick Ghanaian politician has said and done so many things to unmask him.

Kennedy Agyapong subsequently showed a documentary of the investigative journalist purported to be taking bribes and acting against the very ideals he always stands for.

Kennedy has expressed his resolve to expose the nature of Anas —Which the maverick politician started by unveiling the identity of the journalist by dropping his pictures on television.

Now, this latest video (below) is a recent attempt unmasking the popular investigative journalist.

Share
Facebook
Twitter
WhatsApp
Previous articleWendy Shay shows off her mansion and cars
Next article“Evangelist Addai is a fraud” – Abeiku Santana reacts to Occult allegations against his boss, Dr. Osei Kwame Despite

One of the oldest anti-malaria drugs in the world, especially in African, is the Chloroquine. Now, through the chase...
Read more
News

A 42-year-old man identified as  Daniel Baah has been apprehended by the police for impregnating his own 14-year daughter in Accra.
Read more