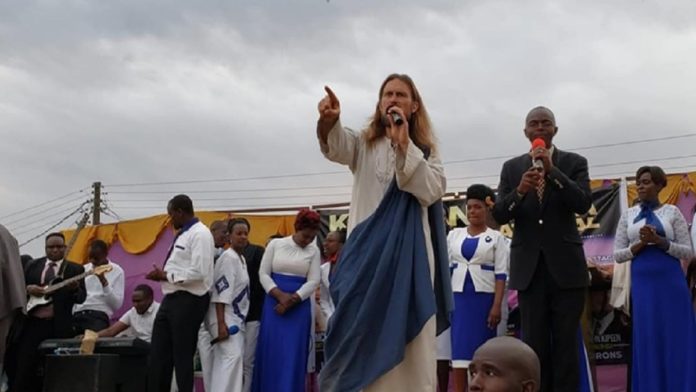 The man who was spotted in Kenya parading as Jesus Christ has finally spoken about he been deported from Kenya.

In a Facebook post, Kenyan Jesus identified as Michael Job disclosed that he is still in Kenya debunking rumors about his deportation.

Michael Job revealed that he has done 9 days of the crusade in Kenya where he has healed and saved many souls.

He added that he dresses like Jesus Christ during these crusades and performs plays focusing on the life of Christ.

He wrote; “Hey guys! Just to let you know there has been many false “fake news” reports here in Kenya about me. I just did 9 days of crusades in Ongata Rongai, Kitengela, and Kiserian Kenya where many people were saved and healed.

I dressed up as Jesus during these crusades my awesome friends and I performed many plays focusing on the life of Christ. Some people, known as “internet trolls”, have made false reports about me claiming to be Jesus, Jesus’ second coming starting in Kenya, me being found and worshipped in churches, and me being deported with pastors from the country, all of which are “fake news. “

I have gotten many messages and just wanted to let you know I am still here in Kenya, preaching in schools, hundreds of children are making decisions for Jesus every day. This morning many students surrendered their lives to Jesus, and we are going to the next school right now. Thank you for praying for us, also please do not pay any attention to the “fake news” or any attention to the media publications of which posted these things. May the Lord abundantly bless you! “Go into all the world and preach the gospel to all creation.” (Mark 16:15)” 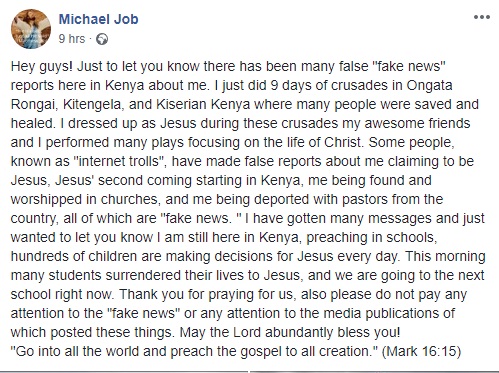 It was reported earlier that Jesus Christ has been spotted in Kenya where he is being worshipped by a congregation.

According to reports, he was invited by a Kenyan pastor for the Kiserian Mega Interdenominational crusade.