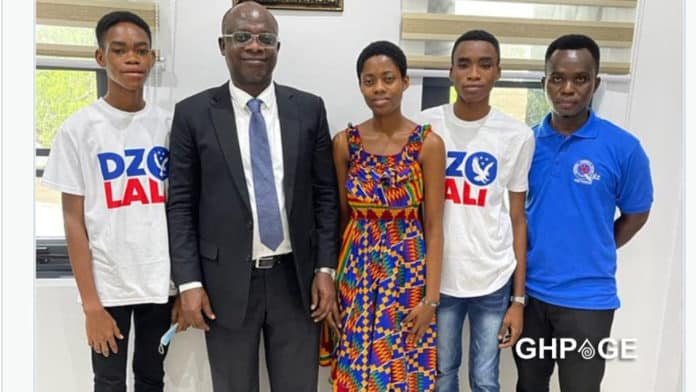 Francisca Lamini, a student of Keta Secondary Technical School (KETASCO), who turned down a fully paid trip to Nairobi and Dubai without her colleagues has made new gains.

The young and promising student emerged as the Most Outstanding Female Contestant at the 2021 National Science and Maths Quiz (NSMQ), after making history as the first female contestant to represent a school in the final of the competition in the last eight years.

She was consequently offered an opportunity to travel with the competition winners, Prempeh College, for her stellar performance and historic feat. However, she rejected the offer on the basis that her mates also come on board.

Francisca’s plea seemed to have touched the hearts of the trip sponsors who have now made her wish come true and as such her colleagues James Lutterodt and Bright Senyo Gadzo, have all won themselves free trips to Dubai.

Sharing a picture to announce the good news on social media, a tweeter wrote: “Thank you to the Director of Passports at the @GhanaMFA Ministry of Foreign Affairs Mr Louis Obeng, for making it possible for the brilliant students of Ketaso to get passports to visit Dubai”

The trio were the contestants that represented Keta Senior High Technical School at the 2021 NSMQ & made history by sending the school to the grand finale for the first time.

Unfortunately, they placed third after a keenly contested competition at KNUST Great Hall on Friday 26th November 2021, where Prempah beat them to the trophy with Presec Legon clinching the second position.

On Monday, Victoria Hamah, a former Deputy Communications Minister under the erstwhile Mahama administration, slammed Francisca for turning down the reward of her hard work.

According to Vicky, her action was a betrayal to feminists who have dedicated their lives to see to the well-being of the girl child in all areas of life.

“This is not heroism but attack against Gender Affirmative Action! This “brave” girl hasn’t yet understood the world,“ She wrote

“She is yet to recognize that her singular celebratory experiences from the competition results from centuries of activism towards women’s liberation and that the reward wasn’t only for her but for the collective struggles of all women.

“She is only benefitting from the works and struggles of women and men before her who have and continue to fight for a gender balance society.“

“It’s unfortunate that, she rejects this justifying affirmative action reward to her. And all those who applaud her for rejecting the reward extended to her, similarly also lack the historical understanding of women’s liberation struggles,”