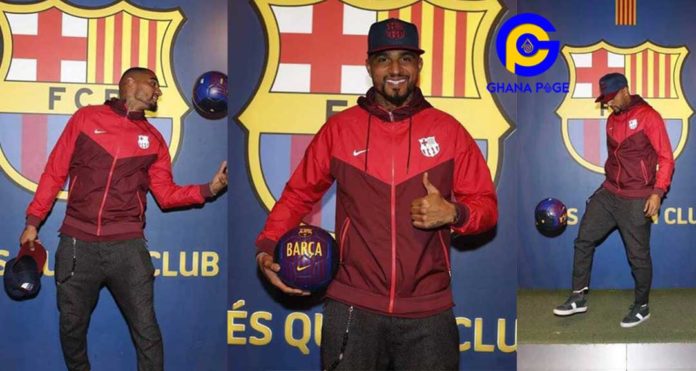 The biggest news in the world of soccer is the signing of Ghana Blackstar player and Sassuolo midfielder Kevin-Prince Boateng to FC Barcelona on a loan for 6 months.

Breaking the news on the signing of the 31-year-old midfielder, a statement from the Catalan giants reads:

”FC Barcelona and US Sassuolo have arrived at an agreement for the loan of the player Kevin-Prince Boateng for the remainder of the 2018/19 season. The agreement includes an €8m purchase option.

Meaning after spending the remaining of the season with Barcelona, KPB has the option to make the move permanent next term.

Kelvin Prince Boateng’s move to Barcelona has generated wild buzz among the Ghanaian community around the world. He is the first Ghanaian player to join the Catalan giants.

See some photos from his signing below

Ghanaian and Deportivo Alavés midfielder Mubarak Wakaso has been captured in a photo lying on a hospital bed with his arm bandaged....
Read more