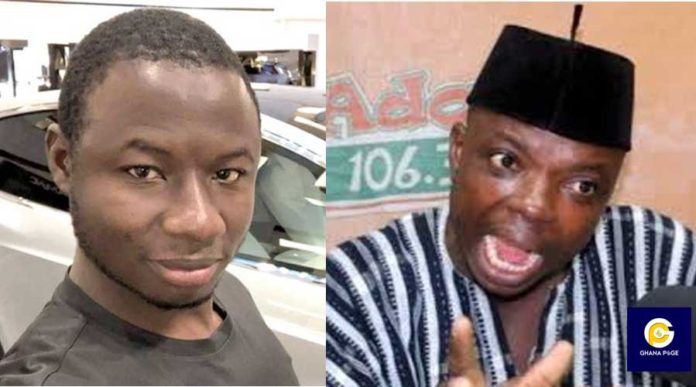 The Brong Ahafo Regional first vice chairman of the ruling New Patriotic Party (NPP), Kwame Baffoe popularly known as Abronye DC has revealed that two persons in connection with the gruesome murder of Investigative journalist Ahmed Suale have been arrested.

According to Abronye DC, two suspects were arrested but one was granted bail by the Kotobabi police while the other is being interrogated by BNI officials.

“Are you aware that the police patrol team arrested one of the suspects in connection with the death of Ahmed Suale?

When they took him to the Kotobabi police station he was released within 30 minutes in collusion with some officers.

The one who pulled the trigger is currently in BNI cells. I am daring them to come out and deny it”, Abronye DC revealed.

ALSO READ: I have been celibate for 12 months -Yvonne Nelson

Abronye Dc also disclosed that the one who was granted bail used to work with the late investigative Journalist and queried why someone linked to the murder was released on bail.

Undercover Journalist with Tiger Eye PI was murdered on Wednesday 16th January 2019 by unknown gunmen on a motorbike.

He was shot three times, twice in the chest and once in the neck at Madina, a suburb of Accra.