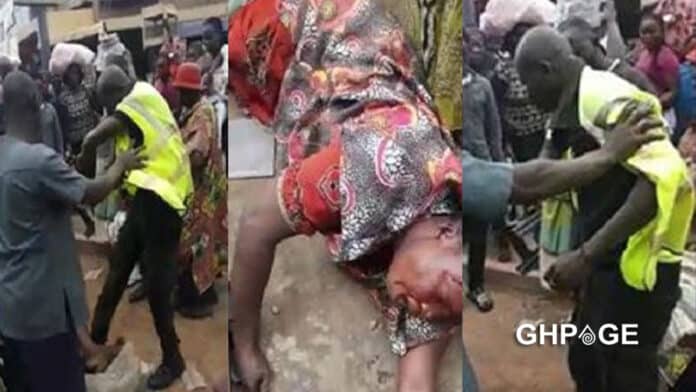 A video making the rounds captures a suspected city guard with the Kumasi Metropolitan Assembly (KMA) assaulting a trader at the Kejetia Market.

The fast-trending video shows the supposed city guard kicking the helpless middle-aged woman on the ground while onlookers watched on as he brutalised her.

The video was obtained by Kumasi-based radio and tv station Oyerepa, accompanied by a report of how the incident unfolded.

According to the report by Oyerepafmonline.com, the victim was assaulted in her quest to prevent the city guard from seizing her goods, which she had displayed for sale on the roadside.

“We sell on the pavement. The KMA city guard was about to seize my things. When I refused to give them to him, he started beating me. He has destroyed all my things. What pains me is that I was not the only one selling on the pavement,” the victim identified as Achiaa lamented in tears.

An eyewitness also recounted her account of the incident.

The eyewitness, however, said he took the victim to a police station to lodge a complaint.

The officer refused to attend to her with the excuse that the victim was selling on the pavement.