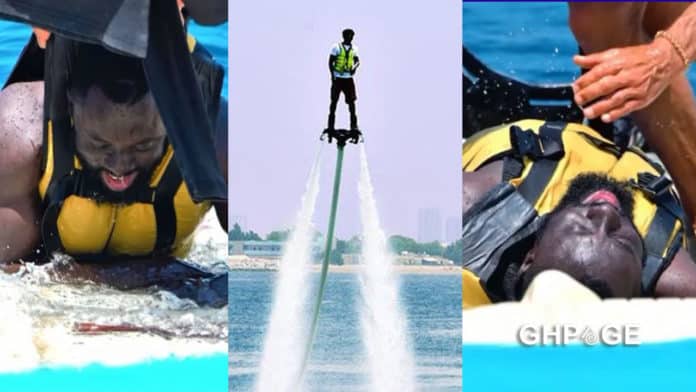 But for luck on his side, Ghanaians would have been mourning the death of Kofi Asamoah after his attempt at flyboarding took a wrong turn.

The award-winning film director is currently on a vacation in a foreign country and decided to visit the beach to catch some fun while at it.

Kofi Asamoah, among other activities he could have got into, opted to take a flyboard ride on the ocean. But what was supposed to have been an exciting adventure ended on a rather tragic note.

According to the CEO and Creative Director of Kofas Media, “all was well and nice with some keche (show off)” until the flyboarding equipment started to act up when he got to the middle of the sea.

In a video, Kofi Asamoah summed up his ordeal of how he gulped down gallons of salt water after the flyboard pulled him underwater with force.

“As I got to the middle of the ocean, the machine started acting up,” he recounted. “And then the tube’s pressure pull me under the sea with force. I struggled, I drunk gallons of salty water.“

“I was tired, strength was gone. I was battling to survive. People shouted for help for me and then they helped me out. See my eyes but I was still smiling. It felt good to be alive”

Flyboarding is an extreme water sport in which people use equipment called flyboards to soar above water.

A flyboard is a brand of hydroflighting device which supplies propulsion to drive the Flyboard into the air to perform a sport known as hydro flying.

The surfing device elevates you into the air, which gives a flying-like sensation.