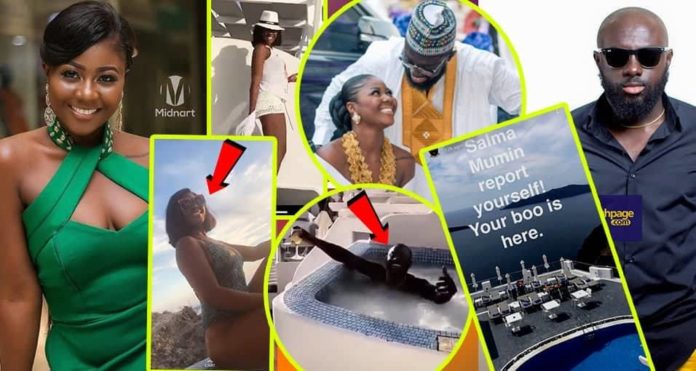 A video of the CEO of Kofas Media, Kofi Asamoah, and sensational actress Salma Mumin hanging out together in Greece, Santorini has hit social media and it’s has resurrected the old rumors that the two are secretly dating.

Kofi Asamoah is on vacation and he is touring almost all the renowned tourist sites across the globe. He has been to Las Vegas, New York, Canada, Dubai and he is currently in the Bahamas.

SEE ALSO: Fella Makafui drops the hint she will be marrying soon

In the Video Ghpage.com has obtained, Kofi Asamoah is chilling in the Bahama in a plush pool and from nowhere Salma Mumin popped up. According to Kofi in the video, every city he has been to, he has met Salma Mumin there or he has been told she just left there.

A few months ago, the entertainment circle was rife with rumors that the CEO of Kofas media was in a relationship with actress Salma Mumin.

Since both never confirmed these rumors, it was left to die but it seems there is more to the relationship between Kofi Asamoah and Salma Mumin than the public knows.

But trust GhPage.com, we are observing and will report back with any new info. STAY WITH US