Kofi Kinaata breaks down in tears during a performance [Video] 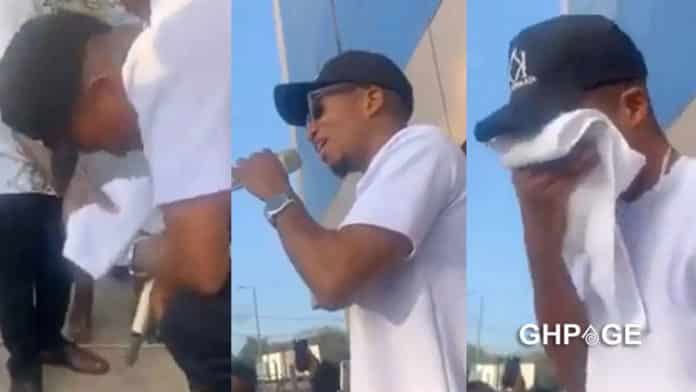 Ghanaian musician Martin King Arthur, better known as Kofi Kinaata, has been captured in a trending video sobbing during a stage performance.

Apparently, the multi-award-winning songwriter was billed to entertain mourners at a thanksgiving service which preceded a funeral over the weekend.

Kinaata had thrilled the crowd with a live band performance of his songs which had guests singing along word for word.

The beautiful delivery of his ‘Thy Grace’ hit song saw the audience cheering him on while others filmed him on their phones as they drew closer to the edge of the stage he had mounted.

Momentarily, Kofi Kinaata got emotional and was moved to tears by the words of his own song as it appeared to have brought some sad memories to him.

A gentleman who was standing close to him and enjoying the performance handed him a white towel to soak his tears as most of the grieving guests started getting emotional.

It’s however not clear whether Kinaata shed tears due to the massive outpouring of love that had greeted his performance or he actually sunk deep into his lyrics.

But this rare moment could be described as the most touching.