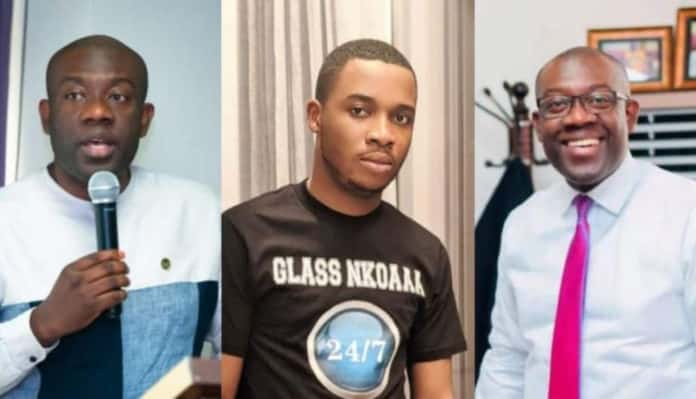 NPP’s lead member, Hon Kojo Oppong Nkrumah has shockingly declared his unflinching love and support for Twene Jonas who is noted for insulting Ghanaian politicians including himself.

The MP for the Ofoase-Ayirebi constituency and Minister for Information highly spoke about Twene Jonas during an interview with Kwame Sefa Kayi on Peace FM earlier this morning.

According to Hon Kojo Oppong Nkrumah, although he doesn’t like how Twene Jonas insults our leaders but no one can deny the fact that he speaks the gospel truth.

He went on to add that, he normally watches his Facebook live videos and Youtube videos most of the time and he likes how he addresses the political issues in the country aside from his famous aggressive attacks on our leaders.

The honourable member of parliament additionally pleaded with Twene Jonas to stop insulting him and other politicians but he can continue with his constructive criticisms which he finds no fault with.

Hon Kojo Oppong Nkrumah is the only Ghanaian politician to openly declare his love and support for Twene Jonas.

We know that Kennedy Agaypong, Hopeson Adorye and Ernest Owusu Bemph won’t be happy about this confession from Hon. Kojo Oppong Nkrumah.