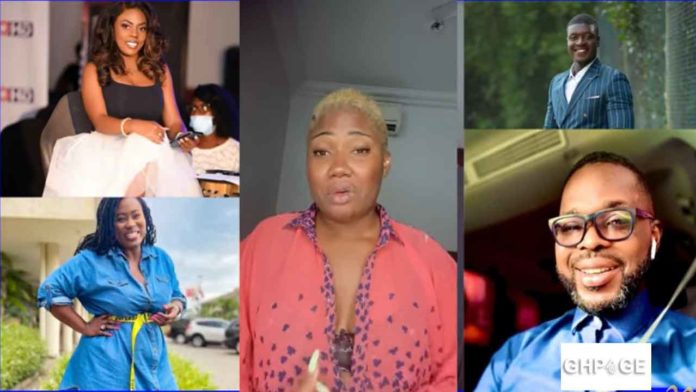 In a live session on Instagram, Abena Korkor dropped a long list of celebrities she has had sexual encounters with.

Abena Korkor who is also a Mental Health Advocate claimed she has had sexual encounters with Lexis Bill, KOD, Sammy Awuku and others.

According to Abena, she had a sexual relationship with broadcast Journalist Kojo Yankson who was also having sexual encounters with Nana Aba Anamoah and Lydia Forson at the same time.

“I mentioned Kojo’s Yankson’s name some years ago that we had sex. Yes, we did. It was fun, I think I wanted more but to him, I was just a big bum that he is having fun with. I think he was actually dating Nana Aba Anamoah and sleeping with Lydia Forson at the same time. I just hope the two women knew and they were ok with that”, Abena Korkor disclosed.

She added that her interview with Delay was very therapeutic for her and has given her the will to talk about everything that happened to her in the past.

It can be recalled that Abena Korkor claimed she once had a sexual affair with media personality Giovanni Caleb which he denied.

In an interview with Delay, Giovanni claimed Abena Korkor was having a relapse at the time she made that revelation and that her statement should be disregarded.

Abena later rubbished Giovanni’s claims and reiterated that they had a sexual affair and wasn’t aware that he was married.