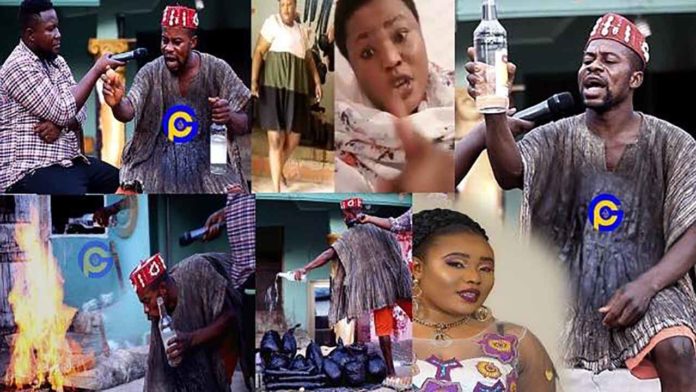 In an exclusive interview with GhPage TV, Komfo Showboy explained that he has known Ohemaa Jacky for almost 10 years before he became a fetish priest.

He explained that he never had any sexual relationship with the gospel musician adding that they are just good friends.

The fetish priest also stated that he knows nothing about the video that went viral and never has any intention of disgracing Ohemaa Jacky.

According to Komfo Showboy, Ohemaa Jacky only came to his shrine to shoot a music video which he is part of.

He explained that Ohemaa Jacky didn’t come to his shrine to perform any rites but it was just a music video for a song they both recorded.

In his bid to vindicate himself, Komfo Showboy rained curses on himself with eggs and schnapps if indeed, he shared the video on social media to disgrace the gospel musician.

Komfo Showboy also rained heavy curses on anyone peddling lies about him in regards to the video that went viral and also on the person who recorded and shared the video.