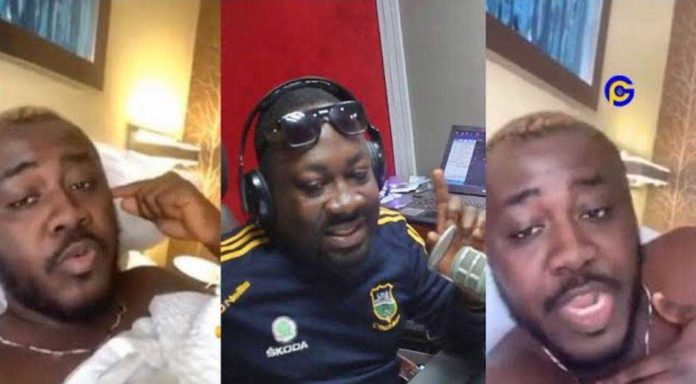 According to the ‘Aketesea’ hitmaker, he helped the radio presenter when he was bedridden with stroke and described him as an ungrateful person.

“Dr Cann, over the years who have done so many evil things against me and this is the right time for me to address it. You called other radio presenters and instigated them to stop playing my songs on air.

You have destroyed my reputation for so many years. I have overlooked all the bad things you did to me over the years because I know you will eventually pay for it. I am warning you to stay out of my business if you want to succeed in this life.

Don’t ruin my name because I have done nothing against you, when you were down with stroke I was in your house all the time taking care of you.

You are evil-minded but this is my last warning to you, change from your bad ways. God will punish you and you will suffer on this earth”, he angrily stated.

This attack and warning by Nana Kontihene comes after Dr Cann, originally known as Francis Ebo Cann revealed that the musician nearly smashed his head with a bottle of beer.

The host of Happy Fm’s Showbiz Extra explained that Kontihene has issues with him because he felt he (Dr Cann) was the one behind a fake story that was published about him in a newspaper.

He also stated that he was the head of the newspaper but had to resign after the fake publication.

“Kontihene’s issue came in the newspaper, and I didn’t approve of it, but till date, Kontihene still has issues with me because of that thing. Kontihene met me at East Legon Kikibees, he picked up a bottle of beer that he will smash my head to kill me”, he stated.