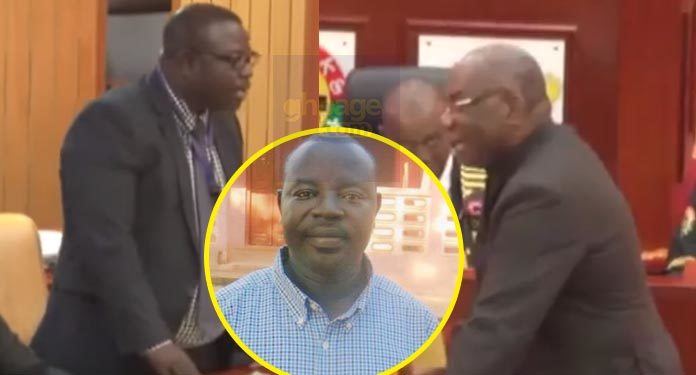 It was all laughter in Parliament when Member of Parliament for Abriem Constitution, Mr John Osei Frimpong asked the Minister for Energy, whether the ministry has plans to provide off-grid electricity to communities in the Aberim constituency in the Eastern Region such as Kyiri Ahanta, Twenwinso, Etwe Nim Nyansa, Kote Ye Aboa, Hwoa Ye Mmobo, Akyekyeresu, Tetteh Brofo, Asarekrom, Alhajikrom and Yaw Broni.

It might surprise you that all these sexually suggestive names of communities exist in this country but indeed so are their names.

These sexually suggestive village names translate to the English language as follows:

In Ghana names of towns and villages are normally given by the first family, person or group of people who settled in those communities at that time.

The names are normally drawn from the life experiences of those individuals or to honour individuals who led exemplary lives to impact others.

Many Ghanaians had not heard of the villages until they were mentioned in Parliament – and they have been left wondering about the origins of the names.

Explaining the rationale, a grandson of one of the early settlers, Atta who is a resident of ‘Kote ye Aboa’ – “Penis is a Fool” explained to the television station there were three brothers who settled in the area.

He said it was one of his grandmothers, Maame Akosua Ani who died in 2011, who explained to him why their great-grandfathers chose those names for the villages.

He said the three brothers moved from ‘Mia w’ani’ – ‘Try harder’ to settle in the area courtesy of the Pankese chief who allowed them to settle and farm in the area.

The wife later divorced and sacked Kwadwo Gyan from the house and took over all his properties.

read this: Has Florence Obinim enhanced her buttocks?- Prophetess cautions her

Gyan turned to his two brothers whom he had earlier sacked from his house for help, and they explained to him how foolish he had behaved by choosing to live with a woman [vagina] instead of sticking to his brothers and now that the “wise vagina” had maltreated him, he was turning to them.

According to Atta, his grandmother Maame Akosua Ani also added that a madman is always not able to find a wife or a woman to have sex with or give birth, because of his mental condition, no woman [vagina] would be readily willing to accept him.

But said a mad woman [vagina] is able to find a man [penis] to have sex with and even gets pregnant since a man [penis[ careless about the mental state of the woman. This, she said was a testimony that ‘Kote ye Aboa – “Penis is a Fool.”

He added that when the penis and vagina meet, the testicles don’t benefit from the enjoyment but since the testicles are always attached to the penis, it always suffers the same fate as the penis but does not get to enjoy thereby making it sad – Shua ye Morbor – “Testicles are Sad”

The three brothers, therefore, chose the names for their villages and along the line, the Oda chief who initially thought the names were indecent and wanted to abolish it, rather adopted it after it was explained to him and decreed that the names should be maintained.

The members of the communities said the names can never be changed and that they were proud of it.

read also: Maame Ama Nima jailed 5 years for beating her husband’s girlfriend given 4 bedroom rent apartment and a shop after being released