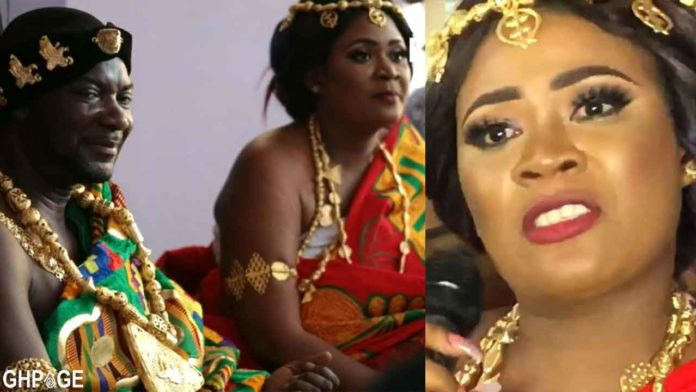 Ghapge.com has sighted videos and pictures of popular controversial Kumawood actress Gladys Mensah Boaku known as Nayas which shows that she has tied the knot.

The actress who is the former girlfriend of gospel musician Ernest Opoku got married in a private lavish ceremony with lots of celebrities in attendance.

According to sources, Nayas’ husband is the Kontihene in Hamburg, Germany known as Nana Kofi Safo Kantanka.

Nayas used to be in a romantic relationship with gospel musician Ernest Opoku and after the relationship ended the actress attacked the musician while he was being interviewed on Adom Fm.

The actress was furious that the gospel has dumped her after bonking her several times and also asked her to abort the pregnancy after she told him she was pregnant.

However, it was later disclosed that Nayas only faked the pregnancy. She has also been involved in several controversies.