Kumawood Died Because We Were Too Ignorant -President Bill Asamoah Confesses 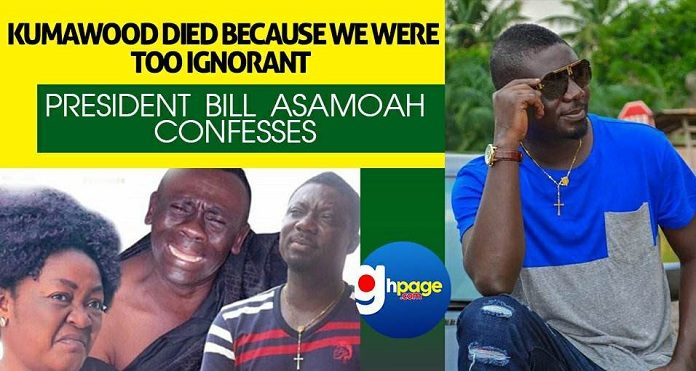 Veteran Kumawood star, Bill Asamoah who is also the President of the Kumasi chapter of the Actors Guild has revealed in a latest interview that indeed despite effort from the Kumawood industry players, the movie industry is dead and it died because they were too ignorant to keep up with time and technology.

When the Ghallywood Movie Industry was stagnant years ago, Kumawood was the savior of Ghana movie industry. But for over a year now, there has been a nosedive in all activities surrounding Kumawood.

SEE ALSO: I Would Have Been A Better Person If I Was Educated –Kumawood’s Akrobeto Cries

Kumawood stars are now either cooking show host on TV or fetish Priests interview show host on TV. But after months of denying that the industry is dying if not dead, the president has finally confirmed it.

According to President Bill Asamoah, they were too comfortable as in industry and too ignorant to see that things were changing so they had to adapt to changing circumstances.

“As an industry, we were too comfortable. We realized the VCD was being phased out and instead of us changing to be abreast of the times, we relaxed and it has overtaken us,” President Bill Asamoah said.

“We thought the people who were buying the VCDs were okay little did we know that the trend had changed. Now it’s about cinemas and selling movies online and we hope and pray that we will be able to adapt to new technologies,” he added.

President Bill Asamoah, however, added that Kumawood stakeholders are still discussing ways to the deal with their problems.

“We need to be abreast of new technologies and have to come up with innovative ways of getting our movies to Ghanaians. Some of us are suggesting pen drives on which we will encrypt the movies so that people don’t copy them unnecessarily.

SEE ALSO: Bill Asamoah Speaks Out the Number Of Cars He Owns After 15 Yrs Of Acting, It’s Unbelievable

“We could also get people to come to the cinemas to watch our local movies. So we’re thinking outside the box and we hope to find a clear way to deal with the situation for our movies to appeal to everyone,” he stated.

The president of the Kumasi chapter of the Actors Guild, Bill Asamoah begged investors and stakeholders with ideas on how the problem can be solved to come on board and help solve the problems. He added that millions will be jobless if the industry collapses completely.