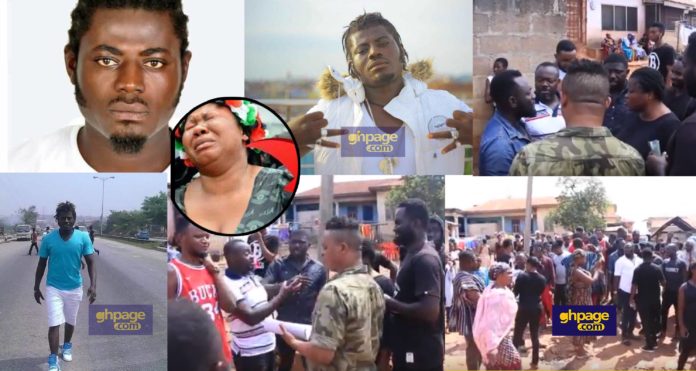 Kumawood actors and actresses this afternoon in a video obtained stormed the funeral ground of their late colleague, Nurudeen Abass to pay their last respect and it was indeed a moment of sadness and grief as they received upon their visit to the family of their dead colleague, Abass Nurudeen aka Blinkz.

Among those sighted were Ashanti Regional chairman of the Ghana Actors’ Guild, Bill Asamoah, Mercy Asiedu, movie producer Jones Agyemang, Papa Kumasi, Kolege etc and you could tell from their looks that the fraternity had been shaken by the death of their colleague.

Per the customs of Islam, Abass had to buried after spending a day at the mortuary.

In the video, his wife could be seen wailing as she bids her husband farewell. An all-pale-looking mum of Abass also couldn’t hold back her tears and also shed tears.

According to the mother, she was in the north when he got a call from one radio presenter narrating the whole incident to her but she never believed it till she got another call from her daughter who’s also in Accra confirming the sad news to her.

According to what we gathered, Abass tried to separate a fight between the brother-in-law of his boss and he ended up picking up a fight with him instead.

During their scuffle, two people stabbed him after which the fled from the area. Whiles, been rushed to the hospital to seek medical attention the actor passed on.

Read this: Photos and cause of the death of Kumawood actor Blinkz