“If You Feel Zylofon Is Not A Brand You Want To Associate With, Leave”: Kumi Guitar Fumes At Stonebwoy 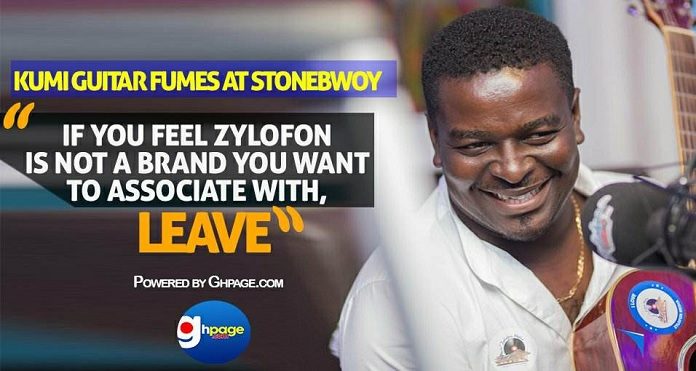 One person who is very angry about the brouhaha going on at Zylofon Media is the very first artist who was signed by Nana Appiah Mensah unto to Zylofon Media Record Label, Highlife artist Kumi Guitar

Over the weekend, news went viral that Stonebwoy shot at an Artist Manager at Zylofon Media, Lawrence Nana Asiamah Hanson aka Bulldog when he attempted to forcefully take Stonebwoy’s car.

Well, Kumi Guitar, the first artist that was ever signed by Nana Appiah Mensah owned Zylofon Media has spoken. According to him, Stonebwoy is being jealous and he is trying to pull down the whole Zylofon Media company down.

SEE ALSO: “Stonebwoy was given a week to stay or leave Zylofon” – Kumi Guitar finally tells it all

Kumi Guitar fumed at Stonebwoy to quietly leave the record if he feels he can’t associate with it anymore and not to bring all of them down.

“What really pushed me to start talking now is last Saturday, Legon had a show in collaboration with Zylofon and we were all billed to perform. We were there and were parked for a long while and a fan called me that they are pulling down all the banners we’ve used to brand the place in Zylofon’s name…so he was asking if the show is closed because he’s not seen us perform…”

“If these things keep happening and he [Stonebwoy] succeeds or people don’t get the picture right, he might succeed in pulling down Zylofon and if Zylofon is down, I am down,” the man who believes he influenced the establishment of Zylofon Media said.

According to Kumi Guitar, Zylofon Media paid all Stonebwoy’s expenses including his trips, recordings and his two major concerts – one at Ashaiman and the other at the National Theatre.

“What I heard was that you got angry because Shatta [Wale] was signed… if you won’t give him what he wants, automatically he [Nana Appiah Mensah – Zylofon Media CEO] will fail to give you what you want or better still, he will go look for somebody who can do the job for him if you cannot do it,” he said.

The highlife artiste strongly believes that the Zylofon Media CEO did nothing wrong by signing Shatta Wale after all “Stonebwoy is not a shareholder of Zylofon.”

He warned the action actions of Stonebwoy could have ripple effects on other artists on the label.

“I’m starting to talk because I began this thing. Our boss wouldn’t have been in this industry. I was the one who spoke to him to do it and I wasn’t selfish, I told him to add people on board and then you [Stonebwoy] also are a beneficiary…yes he was Stonebwoy before we met him but can he say that Zylofon has added nothing to him?

“If you feel that Zylofon is not a brand you want to associate with you should have pulled out,” Kumi Guitar stressed.

Share
Facebook
Twitter
WhatsApp
Previous article“Stonebwoy was given a week to stay or leave Zylofon” – Kumi Guitar finally tells it all
Next articleAudio: Shatta Wale begs Stonebwoy to stay at Zylofon Media