Kumi Guitar recounts his first encounter with Stonebwoy after dissing him 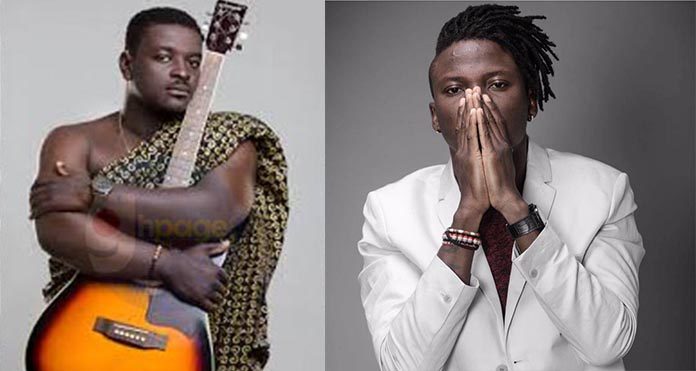 Kumi Guitar has recounted his first encounter with dancehall artiste, Stonebwoy after he released a diss song to him during his scuffle with his record label, Zylofon Music.

According to Kumi Guitar who denied ever insulting Stonebwoy in his “Gyae” song which was released in March this year, Stonebwoy told him to stay back when he made an attempt to approach him after he released the song at the 2018 ‘3 Music Awards’.

“I think we met at 3 Music Awards and me, knowing I said nothing wrong, tried to approach him. I wanted to know his side and explain things to him. I saw Cedi (Stonebwoy’s manager) and noticed Stonebwoy was by his car talking to someone. He told me not to get close that I am not his friend [sic]. That was just us. Imagine if I wanted to meet him in a more public space. I wasn’t feeling too cool,” he disclosed in an interview with Andy Dosty on Hitz FM.

He further stressed that because of the first gesture, he couldn’t offer a word of apology to him.

“I didn’t apologise cos I did nothing wrong. I noticed it wasn’t a good time. He wasn’t in the mood; not to even talk. He told me not to pretend so I returned.”

He later explained how they smoked the peace pipe in Kumasi during a visit to Asantehene, Otumfuor Osei Tutu II by Zylofon Media.

“The next we met again was at the Manhyia palace’s Akwasidae ceremony. When he was greeting courtesy meant he greeted me and we shook hands to make peace,” he said to Andy Dosty.

“The company (Zylofon Media) called me and cautioned me because it [the song] wasn’t released on the ticket of the company. They pardoned me because the content wasn’t insulting. They never told me the consequences though should it happen another time,” Kumi added.

Read this: “Find a better use for your money & stop wasting it on GH celebrities” -Fan Cautions Zylofon CEO