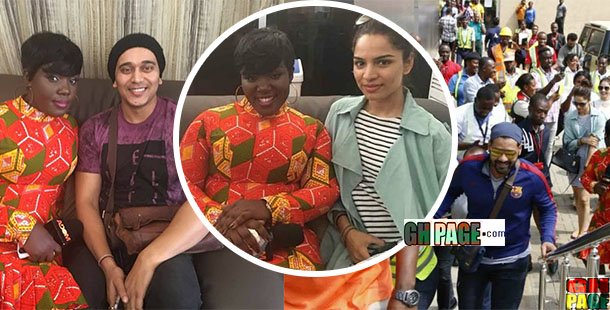 As many already know, there seems to be some sort of competition between Multimedia’s Adom Tv and Despite’s UTV. Anybody who has been following these two Tv Stations will attest to the fact that each of them wants to out beat the other in almost everything.

UTV was the first TV station in Ghana to introduce a panel discussion of telenovelas in Ghana. Interestingly, they did all that in Twi to enable others who couldn’t comprehend some of the things said by the characters fully understand everything.

They started with “Wild At Heart” which had the favorite character, Maricruz. In fact, this act revolutionized the popularity of Telenovelas in Ghana.A year or so later, Adom TV introduced “Kumkum Bhagya” which has the whole TV series translated into Twi.

This act completely shattered the popularity of UTV TV series and Kumkum Bhagya is now the most watch TV series in Ghana.

Again, at the peak of “Wild at Heart”, UTV promised to fly the star actress, Maricruz to Ghana from Mexico. This promised never materialized. Adom TV, on the other hand, promised to bring The Kumkum Bhagya stars to Ghana and yes, they are in Ghana now.

The host of Kumkum Bhagya, Tima Yeboah has taken a swipe at their rival in the industry. In a video posted online by the TV host, Tima Yeboah called UTV “Kiminini fuor” ( Sort of throwing shade at them).

DON’T MISS THIS: Video: The crowd that mobbed the Kumkum stars at the airport proves how popular and the influence the soap opera is having on a section of Ghanaians

She further stated that they are not like the other TV station which make promises that never see the day of light. Watch the video below and tell us what you think

SEE THIS: This PHOTO Of Samira and Pammi of Kumkum Bhagya Has Got People Talking—Says It’s Photoshopped & More