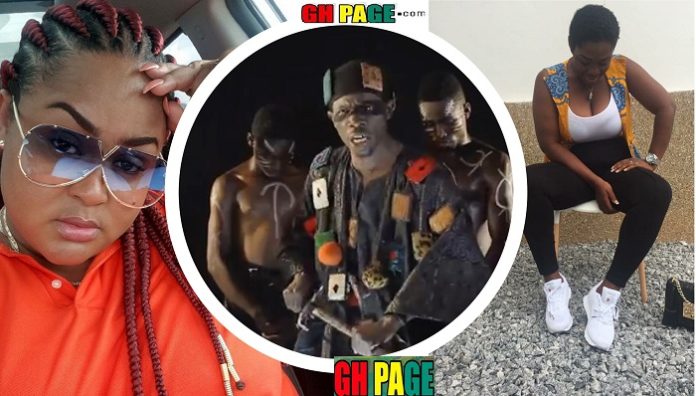 A full-time fetish priest known in private life as Kwaku Boateng but who has turned into a by force musician known as Top Kay — Is one particular nonentity who has been causing all the troubles for Kumawood entertainer, Kwadwo Nkansah Lil Win.

Nobody knew he was a fetish priest who is tasked to make all the spiritual dealings for Lil Win until Ghpage.com exposed his sorry a$$.

Top Kay’s incessant stupidity, awkward approach to the issues and his consistent ill-adviced to the Kumawood star led us to expose one of his threats to now estranged wife of the Kumawood star-Patricia Afriyie.

After all, the said and done, exposing all the secrets—We thought things have died down until the ‘powerless’ fetish priest came out with a new song to attack those in the kumawood industry.

According to him, some of the Kumawood stars are against Lil Win and are seeking for his downfall.

Here’s how they(Perhaps,Lil Win and him) formed that perception(Their beef)

On Emelia Brobbey,Vivian and Kwaku Manu

For what we know, When the Lil Win and Patapaa’s issue popped up and Ghanaians were busily bashing Lil Win’s greedy a$$. —Emelia, Vivian and Kwaku Manu as most people do were seen dancing to Patapaa’s “One Corner” in their “One Corner” at the expense of Lil Win’s “corner Corner”.

They, however, formed the impression that these stars are against them and therefore deserve a reply.

Now, in the song he alleged, Emelia is a husband snatcher and a thief.NB: Emelia Brobbey once had an issue with thievery and husband snatching.

Vivian, he alleged a lesbian. Remember, Vivian has been rumored and alleged to be a lesbo.

And for Kwaku Manu, he called him a failure and backbiter.And oh, I nearly forgot the shades at Big Akwes.He also got his part.He described him as a paedophile and a one who is always aborting pregnancies with ladies.

Big Akwes crime? Because he conducted an interview with Sherry Boss to state his case.

Also, listen to the Audio: Finally, Wife exposes Kwadwo Nkansah Lil Win as an Abuser, greedy bastard, a cheat and how she was treated as a slave in their marriage