Kwadwo Nkansah Lil Win Allegedly opened a cosmetic Shop, bought a white Honda Civic for his girlfriend while his wife sleeps in a single room after packing her out(Photos) 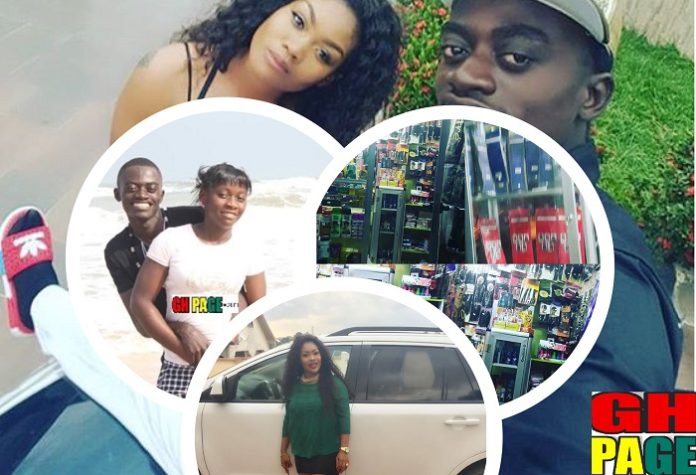 Ghpage.com reported a few days ago that Kwadwo Nkansah’s marriage has hit the rocks —the wife in an exclusive interview with Ghpage.com revealed the psychological trauma she had to go through in the marriage.

Speaking further with her she also revealed some damning rumors your ears cannot believe—That is, Kwadwo, as she affectionately calls him after sacking her from the house rented a single room for her in one of the suburbs of Kumasi.

She further stated, she had heard that Kwadwo has opened a cosmetic shop for his girlfriend, which she mentioned as Sandra—While she as the woman who has two children with the actor remains jobless.

It seems that was not enough, but Kwadwo also bought her a white colored Honda Civic while he has confiscated the car he(Kwadwo) bought for her( wife) into a taxi.— The taxi which isn’t even working anymore.

You might think or ask, who the hell is this girlfriend?

Ghpage.com, a few months ago reported the same girlfriend behind the collapse of Kwadwo Nkansah Lilwin’s Marriage.

Interestingly,  Ghpage.com was told, and if  I am to quote the source-  “Lilwin is flirting, banging and going out with Sandra, that wannabe Kumawood star and not a secret within those in the Kumawood circles .”

READ ALSO: Audio: Finally, Wife exposes Kwadwo Nkansah Lil Win as an Abuser, greedy bastard, a cheat and how she was treated as a slave in their marriage

Indeed, we got in touch with Sandra Ababio, and what she had to say about all the allegations are in this post.