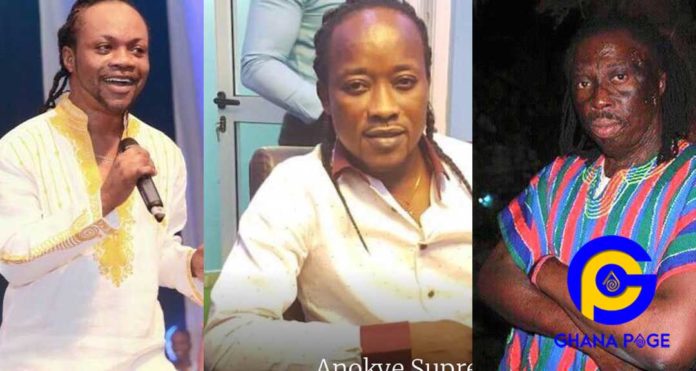 Nana Kwaku Bonsam, the renowned fetish priest of “Kofi oo Kofi” has revealed that Anokey Supremo aka Daddy Lumba Junior died because of his own stubbornness and refusal to listen to him.

According to Nana Kwaku Bonsam in a video obtained by Ghpage.com, he warned Anokye Supremo he will die if he tries doing his tumor removal surgery without apologizing to Daddy Lumba first.

Kwaku Bonsam explained that he told Anokye Supremo there was more to his sickness than the brain tumor the doctors have told him he is suffering from.

For him to be well, he had to apologize to Charles Kwadwo aka Daddy Lumba, the highlife legend who sued him for impersonating.

But Anokye Supremo allowed Bishop Daniel Obinim to deceive him that all is well so he should go for the surgery which ended up killing him.

Watch the full video Below (Scroll to 5:00 Minute for this statement)

Ghanaians woke up on Sunday, 31st May 2020 to a shocking video of a UK Ghanaian man raining curses on another man...
Read more
Lifestyle

A video has surfaced on social media where an angry Ghanaian man is raining curses on Kwaku Manu with schnapps and eggs.
Read more