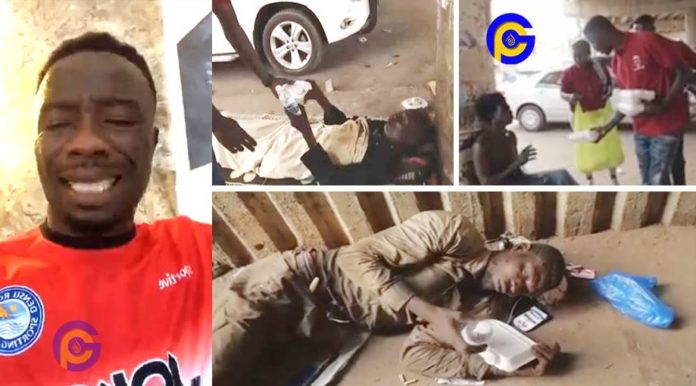 Ghanaian Kumawood actor and comedian, Kwaku Manu recently took to the streets to feed the homeless and less privileged.

According to the actor, this is his small way of giving back to society and also encouraged them not to give up in life.

“I have taken it upon myself to feed the needy and the homeless. It is really sad when I am driving in town and see people sleeping under bridges. This life is not easy and when God blesses you don’t be too proud to help others”, he stated.

The comic actor also sent a word of caution to the leaders of the country. Kwaku Manu is of the view that politics is destroying the country.

“Something is going in Ghana here and I want our leaders to do something about it. Politics is destroying our country, some Christians, pastors, radio presenters are not being truthful just because of politics.

Because some of them are aligned to a particular political party, they cannot criticize or speak against the party when they do something wrong and do not fulfil their obligations to the country.

This attitude is affecting Ghana negatively. I am pleading with our President to be extra vigilant on the Police service because some of them have taken the law into their hands. The Police are expected to protect its citizens but currently, they are rather abusing and attacking civilians”, he noted.

Kwaku Manu also stated that this gesture of feeding the homeless will be a monthly ritual to help reduce the rate of street children.

He also pleaded with the government to fix the bad roads to reduce the accident rate in the country.

“We have a lot of mineral resources in this country but we are still suffering. Our leaders are wicked and are amassing wealth for themselves and their families. Our health facilities are deteriorating and our leaders are silent about it. It is really sad”, he added.