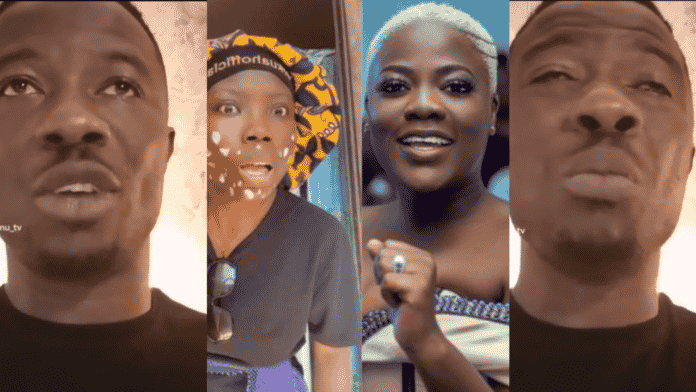 Award-winning Kumawood actor, Kwaku Manu, appears to have joined Lilwin in his fight and smart campaign on Tiktok stars.

It can be recalled that about two days ago, Lilwin angrily descended on Ghana’s famed Tiktok stars for disrespecting Nana Ama Mcbrown.

Lilwin’s anger was fueled by the fact that these Tiktok stars mocked and ridiculed Nana Ama Mcbronw after she went live on the social media platforms and received gifts (Money) from her fans and loved ones.

According to Lilwin in his fulminate, the Tiktok stars who indirectly subbed Nana Ama Mcbrown are not celebrities in the first place and it would take them forever to be in the same pedigree as the screen goddess.

Kwaku Manu who has been steadily following the whole brouhaha ever since Asnatewaa bragged that musicians are nothing without them has also fired the Tiktok stars for growing horns.

According to Kwaku Manu, these Tiktojs stars see themselves as untouchable and very important in the showbiz industry but in the grand scheme of things, they are irrelevant.

Kwaku Manu also gloated that he can get all these Tiktok stars arrested within a twinkling because of his influence in society so they should learn to be humble and respected movie stars because they are the seniors in the game.

Meanwhile, Maa Linda, the mother of Tiktok star Felicia Osie also dropped a video to admonish Lilwin for attacking her daughter and her colleagues.

According to Maa Linda, Lilwin is pained by the fact that the youngins are doing extremely well for themselves and actors and actresses no longer hold the monopoly in the showbiz industry.

It’s going to be a long week filled with beefs and we will serve you our cherished readers with all the exclusive and juicy updates.