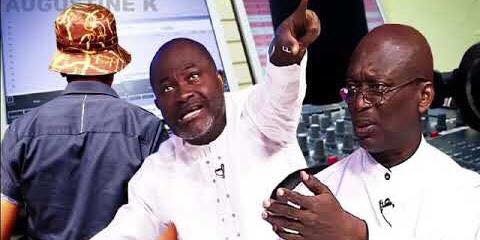 Controversial Member of Parliament for Assin North, Hon. Kennedy Agyapong has given the strongest indications yet, that, the yet-to-be premiered expose on the acclaimed investigative journalist, Anas Aremeyaw Anas will still stand tall even if the video is Exposed.

He has, therefore, vowed to unmask Anas and show the property he [Anas] has acquired, which Mr Agyapong thinks was acquired through “dubious” means and not under genuine circumstances. He alleged blackmail as a means through which the ace journalist has acquired the said properties.

Even though snippets of the episode, titled, “Who watches the watchman” to be premiered on Wednesday, June 27 at the forecourt of Oman FM, at Madina in Accra which has sparked the general public in doubts.

The video, which he says is his own version of secret recordings of how ace investigative journalist, Anas Aremeyaw Anas, operates undercover, will be shown at 7 pm.

Speaking in an interview, Editor-in-chief of The New Crusading Guide, Abdul Malik Kweku Baako Jnr, has alleged that Hon agyapong’s expose will not cause any harm to Anas but will make him popular overall his critics. He added Hafis Mubarak is a liar and a fraudster and cannot prove with any evidence that Anas was involved in fraud.

“Hafis Mubarak is a liar and a fraudster, but if he can prove his case that, he has given the information to Kennedy Agyapong that he has given Anas 50 thousand Us dollars, he should come out and prove with evidence to the effect, he Mubarak even made an attempt to see me through one of the melody reporters and he didn’t show up and I was required to meet him” he said

“Agyapong cant expose Anas, because they are official documents that will show the whole understanding that ‘Agyapong’s video is bogus, it is bogus because having a mindset against a particular person with the determination to destroy the persons integrity, capabilities and credibility of that person, I can assure you, I know Anas as a person and his character… I bet you he will stand tall after all this… I repeat he will stand tall”