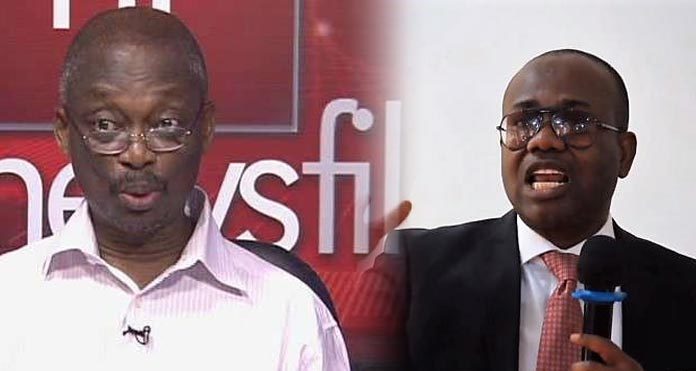 Abu Jinapor Tuesday announced that President Nana Akufo-Addo had lodged a formal complaint with police over the inappropriate use of his name by Ghana Football Association President, Kwesi Nyantakyi but Editor-in-chief of the New Crusading Guide, Abdul Malik Kweku Baako has revealed that the announcement by the presidency breaches the confidentiality agreement with Anas.

Speaking on Peace FM on Wednesday, the veteran journalist stated he had already protested government’s decision to make the announcement in the manner it did without first informing the key actors and also in violation of an agreement between the parties.

According to Kweku Baako, once the president and the vice-president were mentioned by Nyantakyi as potential beneficiaries of bribe money, they had a right to know.

It was to that extent only that the portions of the investigation concerning them were presented to them for viewing.

“I have complained to those who called the press conference. I protested and I gave reasons for my protest and I’m told my protests have been made known to the president,” he said.

Meanwhile, the presidency explained the announcement had to be made because ace journalist, Kwami Sefa Kayi, had stated on his Kokrokoo show that the President and his Vice had been mentioned in the investigative video – a statement picked up by social media and

“You will see so many things, hundreds of people involved – football administrators, political elements, referees, linesmen (assistant referees) and so on.”

Kweku Baako expressed regret that the GFA President had been caught in a web he may have helped weave.

“I like Kwesi Nyantakyi; he knows that; it is painful what has happened but one cannot cover up what appears to be a transgression.”

READ MORE: VIDEO: THIS IS HOW COUNTRYMAN SONGO REACTED TO HIS SACKING FROM MULTIMEDIA