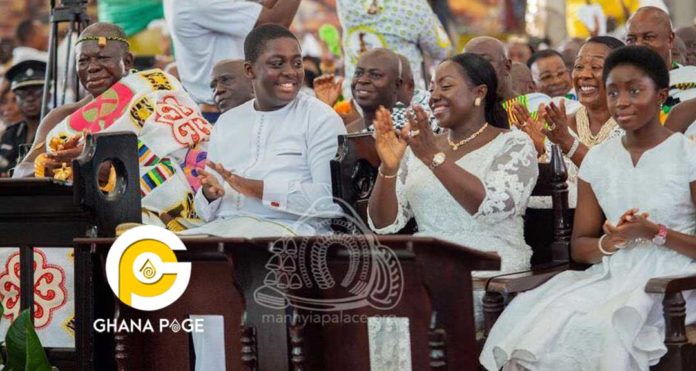 Until recently, few people knew the beautiful Lady Julia, the wife of the overlord of Ashanti Kingdom, Otumfour Osei Tutu II. Little to nothing is known about the children of Otumfour Osei II, not even pictures until now.

The Overlord of the Ashanti Kingdom celebrated his 69th birthday on Monday which coincided with the grand final of the 20th-anniversary celebration of his enstoolment. Otumfour Osei Tutu II held a thanksgiving service to mark the day at St Cyprian’s Anglican Cathedral in Kumasi on Monday

SEE ALSO: Rawlings vowed not to speak to Kufuor, I brought them together-Otumfour

Otumfour’s wife, Lady Julia, and children were present to give thanks to God for taking care of their King, Father, and Husband. The two adorable children, Nana Afia Kobi Serwaa Ampem and Nana Kwame Kyeretwie look beautiful on the day.

The Thanksgiving Mass was celebrated by the Anglican Bishop of Kumasi, Most Rev. Prof. Daniel Yinkah Sarfo. He was assisted by a host of priests and pastors from within and outside Kumasi, including the Most Rev. Peter Kwasi Sarpong, Archbishop Emeritus of the Kumasi Archdiocese of the Catholic Church.

Others at the event were chiefs from the Asanteman Council, Vice-President, Dr. Mahamudu Bawumia; the Chief Justice, Justice Sophia Akuffo; Chief of Staff, Mrs. Akosua Frema Osei Opare, and some members of the diplomatic corps.

The Chairman of the Council of State, Nana Otuo Siriboe and Juabenhene, and the Deputy Majority Leader, Ms. Adwoa Safo were also in attendance were all in attends.