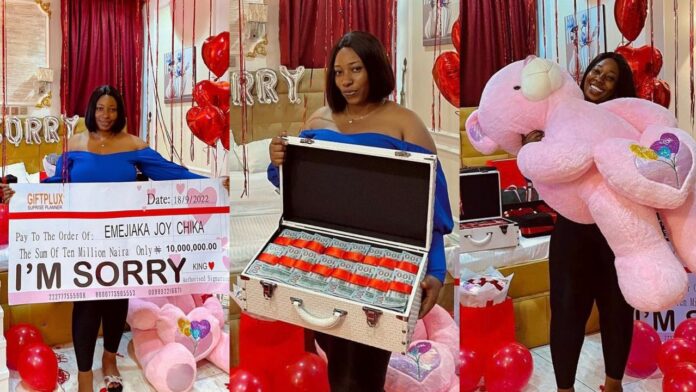 A lady has gone viral on the internet for obviously receiving loads of dollar notes as an “I am sorry” token.

She was given a special treat by her boyfriend who had come to seek an apology for wronging her.

Photos shared on social media shows a happy girlfriend who was glad that her boyfriend had gone up and above to show how remorseful he was.

Check out the photos below…

The gentleman’s crime or offence which warranted him spending so extravanegly jiust to ask for forgivenss is very much unknown. Below were some the reactions…

@DanielRegha wrote: People lie a lot to gain clout online, so I doubt a man will spend a stup!dly large amount of money to apologize to his lover; Love is indeed blind but there’s a limit to that bl!ndness. Anyone man who spends stup!dly is either indulging in cr!me or being c¤ntrolled sp!r!tually.

@DamiPosh3 wrote: This is the “I don’t wanna be a mechanic, I wanna be a baller” trend thing for… because what have you done that you’re sorry with 10m?? You killed someone/did ritual? And you want to shut her up?
Just asking ? cossss..

@Engaded wrote: In my opinion the guy is the perfect definition of a gentleman and it’s really sad that men like this are rare to find. Saying sorry in the most fashionable way shouldn’t be mocked, rather applauded. Twitter standards is terrible nowadays, I’m logging off.